Ready to back the Brits? Tickets are now on sale for the Davis Cup in Glasgow this September
LTA Home Play Ways to play Padel How to get started playing padel
Padel

How to get started playing padel 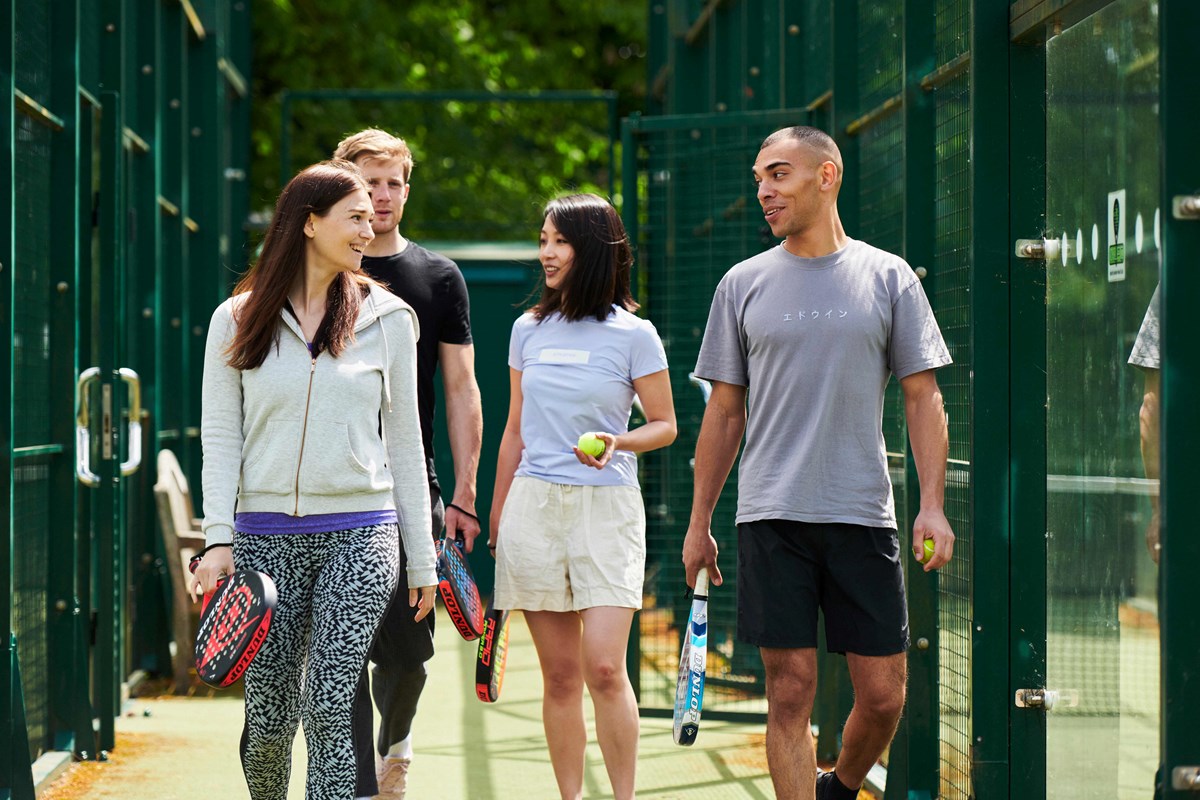 Want to start playing padel, or just looking to find out a bit more about one of the fastest growing sports in the world? Well, you’ve come to the right place.

We’ve got everything you need to know – from the basic rules to the equipment you’ll need, here’s the lowdown on all things padel.

Padel is a sport for anyone and everyone.

There’s a reason why it’s one of the fastest growing sports in the world – it’s easy to pick up and much more difficult to put down. No matter your age or ability, everyone is welcome on the padel court.

You don’t have to have played tennis – or any other sport before – just grab a bat, a doubles partner, and away you go!

There are padel courts across the country, mainly located within tennis clubs, leisure centres and local parks.

Find out where your nearest padel courts are below with our helpful map. You can also find out how to contact a venue near you if you fancy a few lessons:

Padel is a fast-paced, social racket sport that is often described as a mix between tennis and squash. Predominantly played as doubles, padel is suitable for anyone to play and it’s easy to learn the basic skills.

All you need is a partner, some basic equipment (see our recommendations below), a court, and away you go. Padel is played on what looks like a smaller tennis court, with a net dividing both sides and glass walls surrounding it – which you can play the ball off to try and win the point.

In padel, scoring is the same as tennis – but that’s where a lot of the similarities end.

A padel court has walls, so your shots can be played off them – like in squash – to find wicked angles and creative shots to beat your opponents. As a bonus, you can even bounce the ball off a wall on your own side of the court – if you can get it to land on the other side of the court!

Also, unlike tennis, when a ball is served it must bounce once on the floor then hit underarm. But don’t worry, you still have a first and a second serve.

You can also volley the ball during a rally, however, the ball is determined as “out” if it hits a wall before touching the ground. In padel, a smash or overhead if struck well can result in the ball rebounding out-of-play – but beware that your opponents can run out of the side gates to return the ball! This is allowed on certain courts that have enough out-of-bounds space and is common at the professional level.

Like tennis, a set is won when a team wins six games and there is at least two games difference – failing that the set is decided by a tie-break. Matches are best of three sets.

Can you hit the fence in padel?

If the ball hits the wall or fence before it hits the playing field, this counts as a fault and a player loses the point. Once the ball bounces, it may hit the wall once or more before it goes over the net to the other player.

Find out more about the rules of padel below:

Padel courts are designed for four players and are roughly 25% smaller than the size of a tennis court. The speed of the game, combined with the smaller size of a padel court, makes singles play difficult, and most padel matches are played as doubles.

Some padel courts are designed especially for singles, but around 90% of all padel courts in the world are doubles specific. At a professional level the game is mainly played in doubles, as seen by the top pros competing on the international padel circuits.

There’s no dress code on the padel court – it’s all about wearing what you feel most comfortable in.

We’d suggest some kind of sports kit and a comfy pair of trainers are a good place to start. However for the more advanced player, there are specific tennis trainers that can better suit the playing surface – if you fancy buying some yourself, we’d recommend chatting to a specialist padel retailer.

To play padel, all you need is a bat and a ball.

The bat is smaller than a tennis racket but it weighs slightly more as it has a much thicker body. It’s made out of an EVA foam material, with holes drilled into the hitting surface area. Padel bats come in three different shapes – round, drop-shaped and diamond-shaped. We’d suggest starting out with a round bat as these will offer you the best control if you’re a beginner.

Junior bats are also available for kids, which are slightly lighter and have a shorter grip to make them easier to use.

The ball looks very similar to a tennis ball, but it has slightly less pressure. This means it will rebound off the walls slower, which helps give you more time to hit your shots.

Most padel venues will have everything you need to get started and will have padel bats and balls available for you to hire, so you don’t need to worry if you’ve never played before.

However, if you do decide you want to buy some padel gear for yourself, you can pick up a starter bat for around £30 to £50. via the British Tennis Shop.

Padel bats come in three different shapes – round, drop-shaped and diamond-shaped. We’d suggest starting out with a round bat as these will offer you the best control if you’re a beginner. Junior bats are also available for kids, which are slightly lighter and have a shorter grip to make them easier to use.

Find a local competition and take your padel skills to the next level with one of our many LTA padel competitions across the UK.

If you have any padel questions then please see our FAQs or send us a message here.

Find out how you can get in touch with us.