Keep up to date with all the latest action from the British players at the Olympic Games in Rio!

For the full schedule and order of play visit the official website of the Rio Olympics. 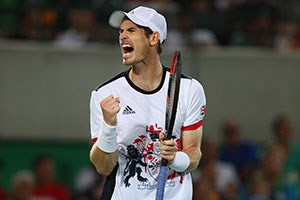 In beating the Argentine 7-5, 4-6, 6-2, 7-5 Murray won his 18th match in a row and became the first player ever to successfully defend an Olympic singles titles and win two Olympic singles gold medals.

On an extraordinary super Sunday for British sport with a host of athletes winning medals in Rio, flag bearer Murray ensured he added another gold to the tally with a stunning four hour display.

In a brutal match with some incredible power from Del Potro and shot making from Murray, you couldn’t take your eyes off it for a second and the British No.1 broke serve three times on his way to clinching the opener.

After Del Potro had bludgeoned his way to levelling the match with some gigantic forehands, the Wimbledon champion showed his metal to come on strong and comfortably seal the third. 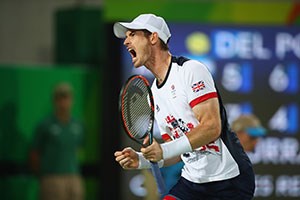 Four breaks of serve followed at the start of a magical and memorable fourth. After some exhausting rallies Del Potro found a second wind to break once more and lead 5-3 but Murray had other ideas and roared back level.

And he won the match by breaking Del Potro again on his second match point in an emotional tussle which left both men in tears after embracing at the net.

The final awaits! Andy Murray remains on course for successive Olympic gold medals after beating Kei Nishikori 6-1, 6-4 to give himself a chance of creating more history. 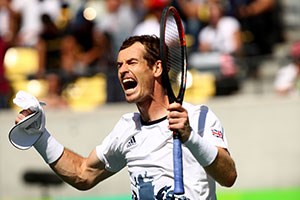 If the British No.1 wins on Sunday against Juan Martin del Potro, he will become the first player ever to successfully defend an Olympic singles title and win two titles.

The duo had a titanic battle at the Davis Cup in March but an awesome Murray was far too strong for the Japanese player in Rio and dominated the first set in 30 minutes.

One break in the second was all he needed to secure the victory but only after winning one of the rallies of the tournament in the final game, coming out on top of a 23-shot rally to set up match point!

What a match! Andy Murray held his nerve to overcome spirited American Steve Johnson in a thrilling Olympic quarter-final.

Murray set up a hotly contested meeting with Kei Nishikori in the last four after coming through 6-0, 4-6, 7-6(2) in Rio. 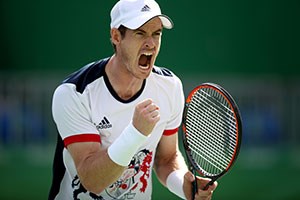 The Wimbledon champion looked on course for a resounding victory after thumping Johnson 6-0 in the opener but his opponent improved dramatically and some thunderous forehands helped him level the match.

Johnson went a break up to lead 4-3 in a tense decider but Murray hit straight back and was not to be denied, comfortably winning the tie-break to set up another Olympic semi-final.

Murray said: “It’s been difficult in tough conditions. After great starts I was close to going out. Sometimes that can work in your favour but you want to play a little bit better.”

Andy Murray overcame a scare against the enigmatic Fabio Fognini to move into the Olympic quarter-finals before Johanna Konta exited at that stage to Angelique Kerber. 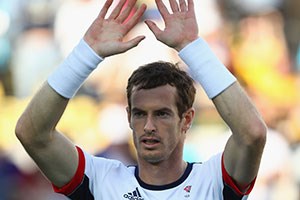 Murray, defending his title from four years ago, will clash with American Steve Johnson in the last eight after his 6-1, 3-6, 6-3 victory in a windy Rio de Janeiro.

The British No.1 looked in major trouble when 3-0 down in the deciding set having just lost eight games in a row but in trademark fashion he fought back against the Italian and battled to win the last six games to get over the line.

No.10 seed Konta, who had an epic against Svetlana Kuznetsova on Tuesday, was next on court against the in-form German and found it tough going as the Australian Open champion dominated from start to finish and ran out a 6-1, 6-2 winner.

An incredible performance from Johanna Konta saw her battle through an epic three-hour tussle with Svetlana Kuznetsova to move into the Olympic quarter-finals.

The British No.1, who it has been confirmed will play Mixed Doubles with Jamie Murray, lost the opener and was 0-Andy Murray40 down on her serve at 5-5 in the decider but somehow found a way to outlast the Russian 3-6, 7-5, 7-5. 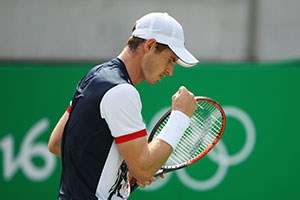 Konta lost her serve early in the second set before breaking back three times along the way to levelling the match. After letting a 5-3 lead slip while serving for the match in the third, the debutant recovered superbly to claim the thrilling victory on her fourth match point.

Earlier on Andy Murray continued to race his way through the draw with a 6-3, 6-1 destruction of Argentine Juan Monaco. The defending champion was in imperious form throughout and goes on to face either Paire or Fognini in Round 3.

"I'm here to compete and I'm really enjoying being part of the whole thing,” said Johanna Konta after her smooth 6-2, Kyle Edmund6-3 victory over the dangerous Caroline Garcia of France. 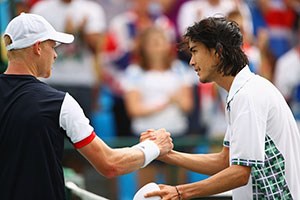 The British No.1 was again dominant throughout at her first Olympic experience and goes on to face a tough task against Russia’s former Grand Slam champion Svetlana Kuznetsova in the last 16.

Kyle Edmund and Heather Watson both exited the singles competition though on Day 3 with Edmund, who lead 3-0 in the opener and 4-2 in the second, going down to Japanese player Tara Daniel and Watson fighting back against the tricky No.15 seed Elina Svitolina in the second set before losing the decider.

Defending champion Andy Murray got his campaign off to the perfect possible start with a comfortable victory over Viktor Troicki in a blustery Rio de Janeiro.

The British No.1, who will now face Juan Monaco, lost his serve in the very first game but soon recovered to sweep Johanna Kontaaside the Serb and take the opener before following it up with a dominant second in which he broke serve twice. 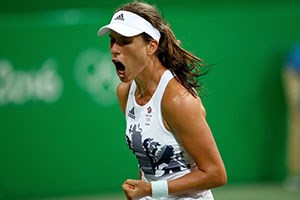 Overnight Johanna Konta, the first British woman to be seeded since tennis returned in 1988, marked her first ever Olympic match in style by easing past Stephanie Vogt from Liechtenstein 6-3, 6-1 and will now face Caroline Garcia.

There was disappointment for the Murray brothers though as home favourites Thomaz Bellucci and Andre Sa, roared on by a partisan crowd, knocked them out of the doubles in two tense tie-breaks.

Kyle Edmund and Heather Watson both progressed through to the second round of the Olympic tennis event with contrasting victories on Day 1. 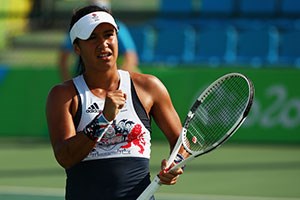 British No.3 Edmund, making his Olympic debut, danced past Aussie Jordan Thompson breaking him early on in both sets to comfortably win 6-4, 6-2 and set up a clash with Taro Daniel.

Wimbledon Mixed Doubles champion Watson faced former World No.14 Peng Shuai later on and looked good for a straight sets win when twice going a break up in the second set and serving for the match but the Chinese player fought back superbly to take it on a tie-break.

Watson, the British No.2, wasn’t to be denied though and in sweltering heat broke three times in the decider before holding her nerve to serve it out after two-and-a-half hours.

For the schedule and results, go to the official website of the Rio Olympics and get the latest from Team GB.