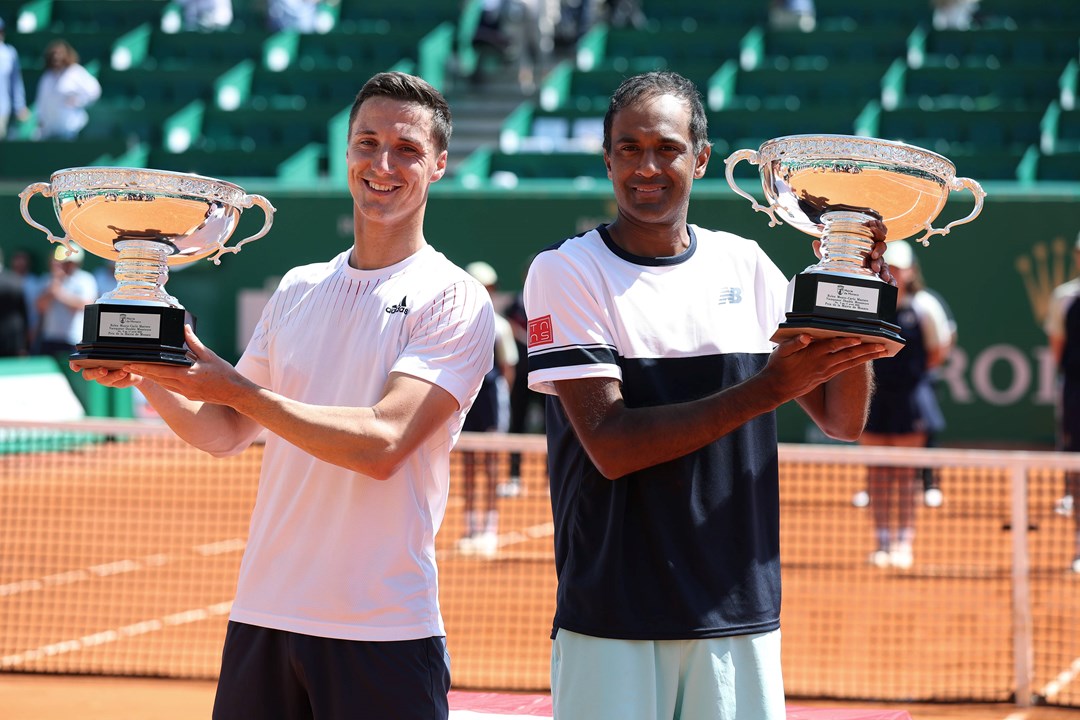 Get the latest from the Brits competing at the Monte-Carlo Masters this week. 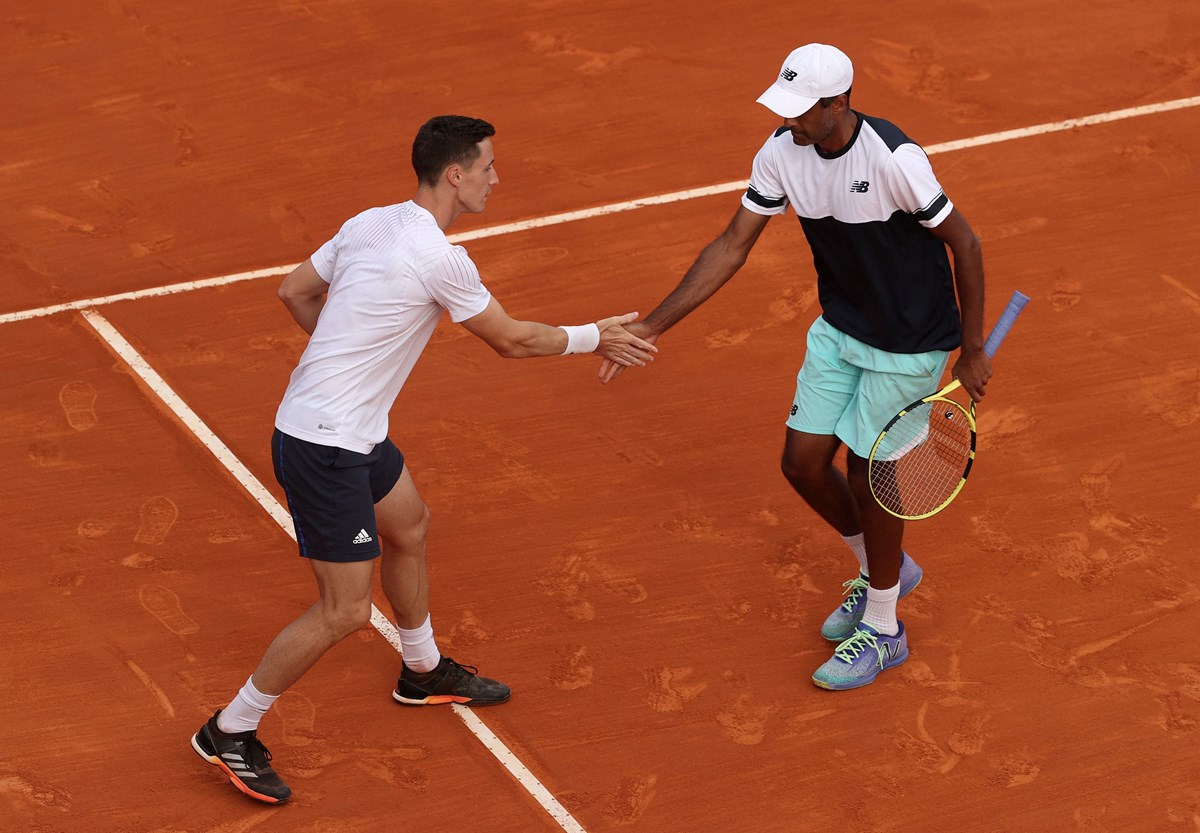 Joe Salisbury and Rajeev Ram are the new Monte-Carlo Masters doubles champions after an emphatic 6-4, 3-6, 10-7 win over Juan-Sebastian Cabal and Robert Farah.

Their victory marks their second ATP 1000 title together (previous - Canadian Open 2021) and sixth in total as a team. It's also their first trophy on clay, which will fill them with great confidence ahead of this year's French Open.

The pair now extend their spots at the top of the world rankings - with Salisbury ranked as the world No.1.

In a high quality doubles match up, Salisbury and Ram looked to make a statement from the first game, just missing out on two break point opportunities. They continued to pile on the pressure and eventually got their reward, making their breakthrough in the seventh game.

The top seeds only dropped seven points on serve to take the first set 6-3. 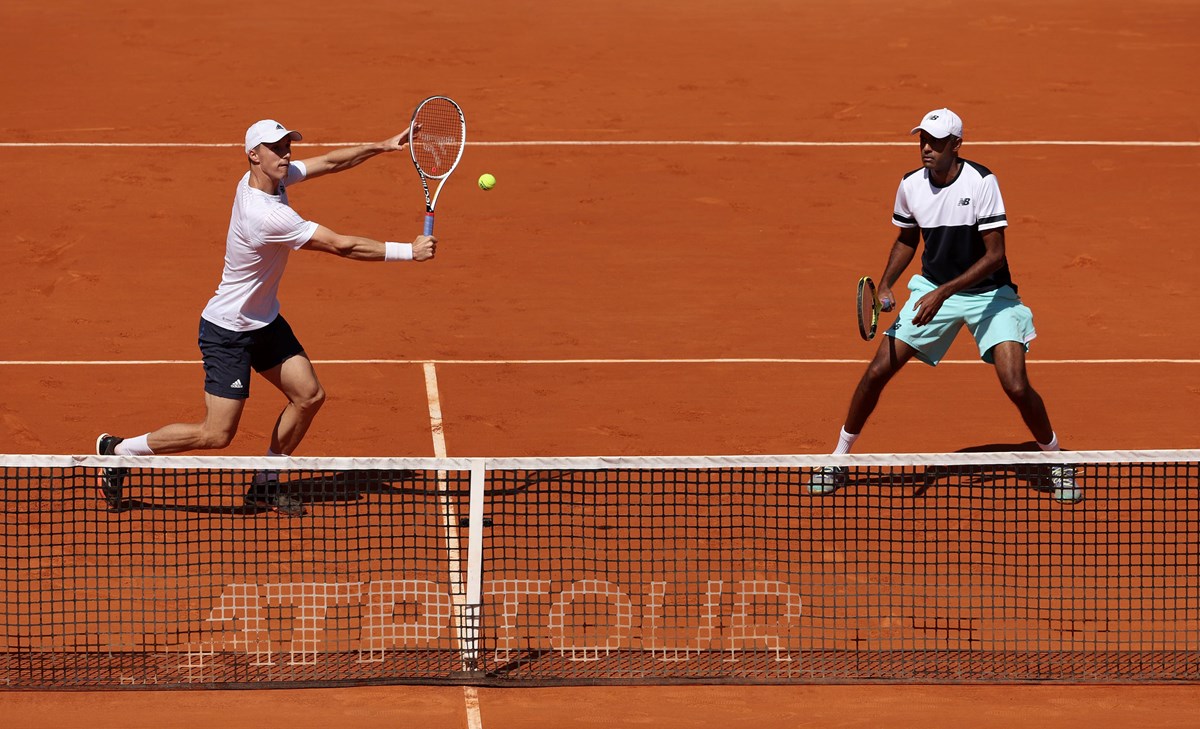 However, the Colombian duo came back firing in the second. The two-time Grand Slam champions had the clinical edge in a series of deuce deciding points at the end of the set to draw level.

With the title decider coming down to a match tie-break, Salisbury once again stepped up to the plate. In a pivotal point at 3-2, the Brit pulled off a remarkable point, stretching to block a smash before putting away a punishing backhand winner. Having got the mini-break in the bag, Salisbury and Ram didn't let the lead slip and the British star sealed the title with a hammer of a forehand through the middle of the court. 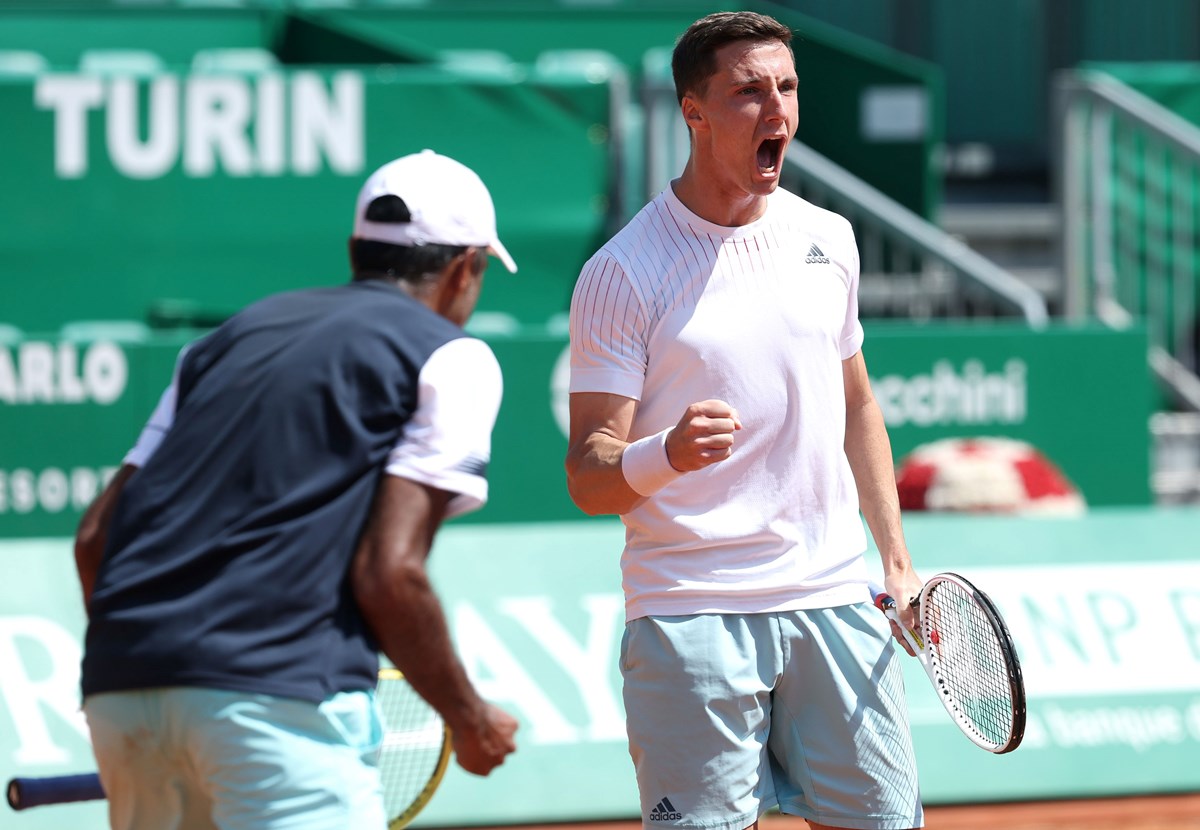 Joe Salisbury and Rajeev Ram are through to the final of the Monte-Carlo Masters after defeating fellow Brit Jamie Murray and Rohan Bopanna 3-6, 7-6(4), 11-9.

Playing for their second ATP Masters title together, Ram and Salisbury will face either Juan Sebastian Cabal and Robert Farah or Marcelo Arevalo and Jean-Julien Rojer.

Salisbury and Ram’s 100% record on serve this week came undone in the opening set as the British, Indian duo took a commanding lead in the sixth game. Murray and Bopanna had further break point opportunities to seal the set at 5-2 but had to settle for an easy service game to go 1-0 up.

The top seeds grew into the match in the second set and showed the dominant service display we’d seen throughout the week, coming away with 87% points won on first serve without facing a break point as they went to the tie-break.

With their spot in the tournament on the line, Salisbury and Ram proved clinical – taking the first mini-break and never looking back.

In the latter stages of the deciding match tie-break, world No.1 Salisbury took charge with a flurry of winners, setting up three match points. But Murray and Bopanna came back fighting, levelling the scores at 9-9 after a lucky net cord landed right in their favour.

Salisbury set up yet another match point and on the fourth time of asking made it count with a deadly volley, splitting Murray and Bopanna apart. 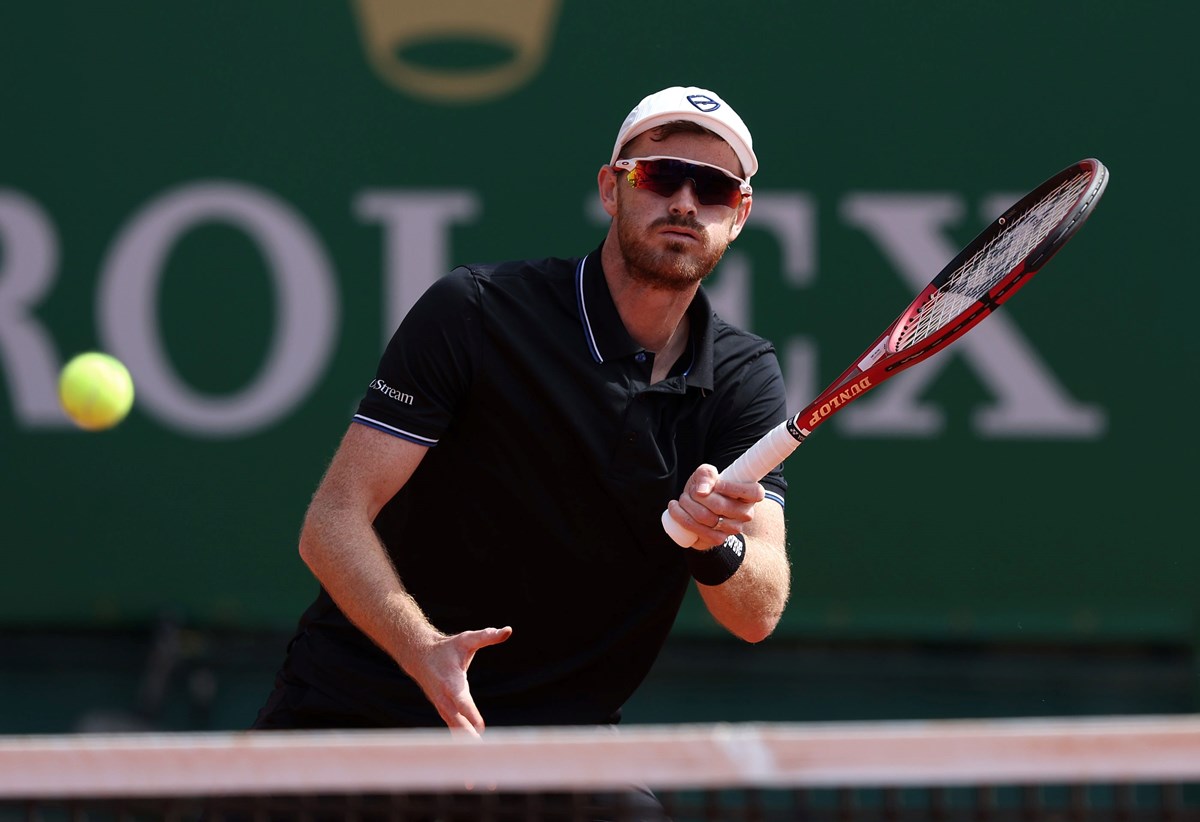 Jamie Murray and Joe Salisbury will face each other in Saturday's semi-finals in Monte-Carlo after both picked up straight set wins on day five.

Murray and Rohan Bopanna kicked off the day with a dramatic 7-6(8), 7-6(8) quarter-final victory over Argentinian, Spanish duo Horacio Zeballos and Marcel Granollers.

Top seeds Salisbury and Rajeev Ram wasted no time in defeating Tim Puetz and Michael Venus 6-4, 6-3 in an hour and 20 minutes.

Murray and Bopanna had the clinical edge in their match up against the third seeds. With no breaks of serve throughout the set, the newly formed partnership had to save multiple set points in both sets before wrapping up a hard-earned win.

Still yet to be broken at this year's Monte-Carlo Masters, Salisbury and Ram look like a tough outfit to beat in Monaco. The pair made their breakthrough when they needed it most at the end of the first set and used that momentum to take an early 2-0 lead in the second.

There was no catching the British, American team from there as they served out the set without facing a break point to secure their place in the semis. 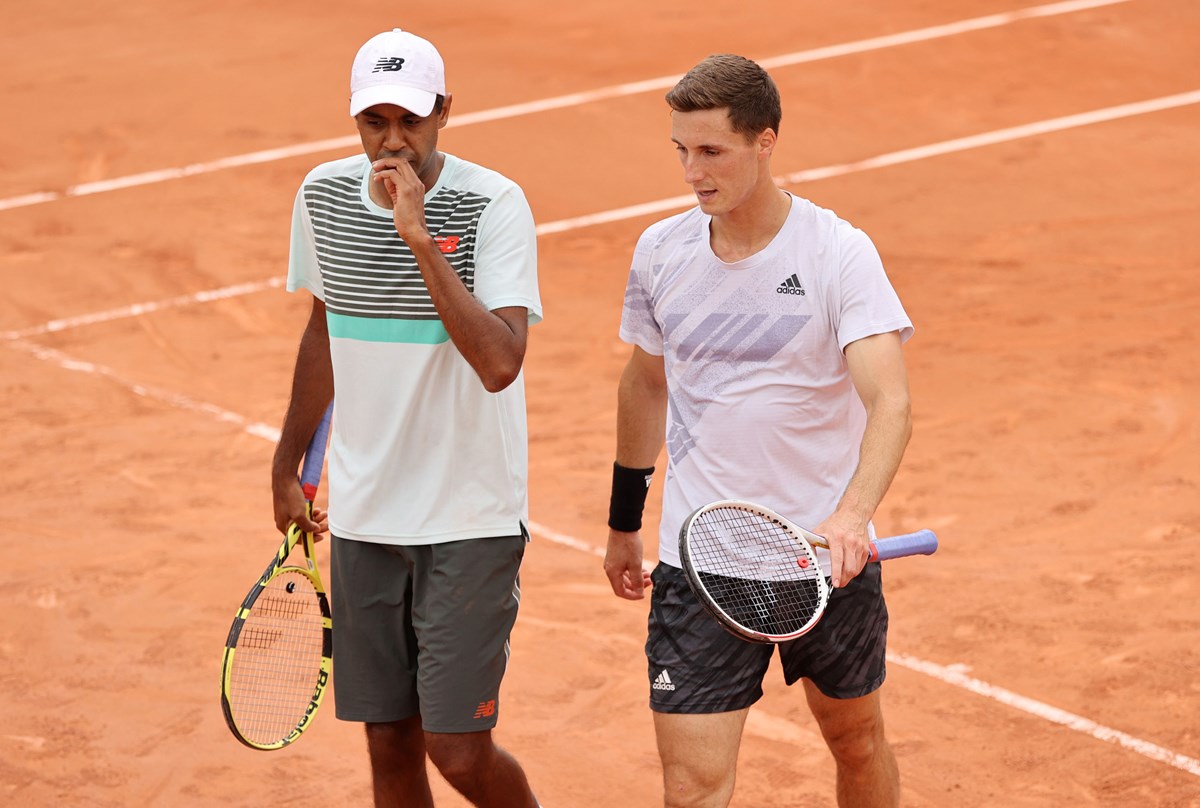 Jamie Murray and Joe Salisbury are on track to potential face each other in the semi-finals of the Monte-Carlo Masters with impressive second round wins.

Murray – who is teaming up with Rohan Bopanna this week for the first time – came through another epic 6-4, 6-7(7), 10-7 against American duo Taylor Fritz and Sebastian Korda.

In the quarter-finals, Murray and Bopanna will take on third seeds Horacio Zeballos and Marcel Granollers after they received a walkover against Dan Evans and Diego Schwartzman. Salisbury and Ram will play Tim Puetz and Michael Venus. 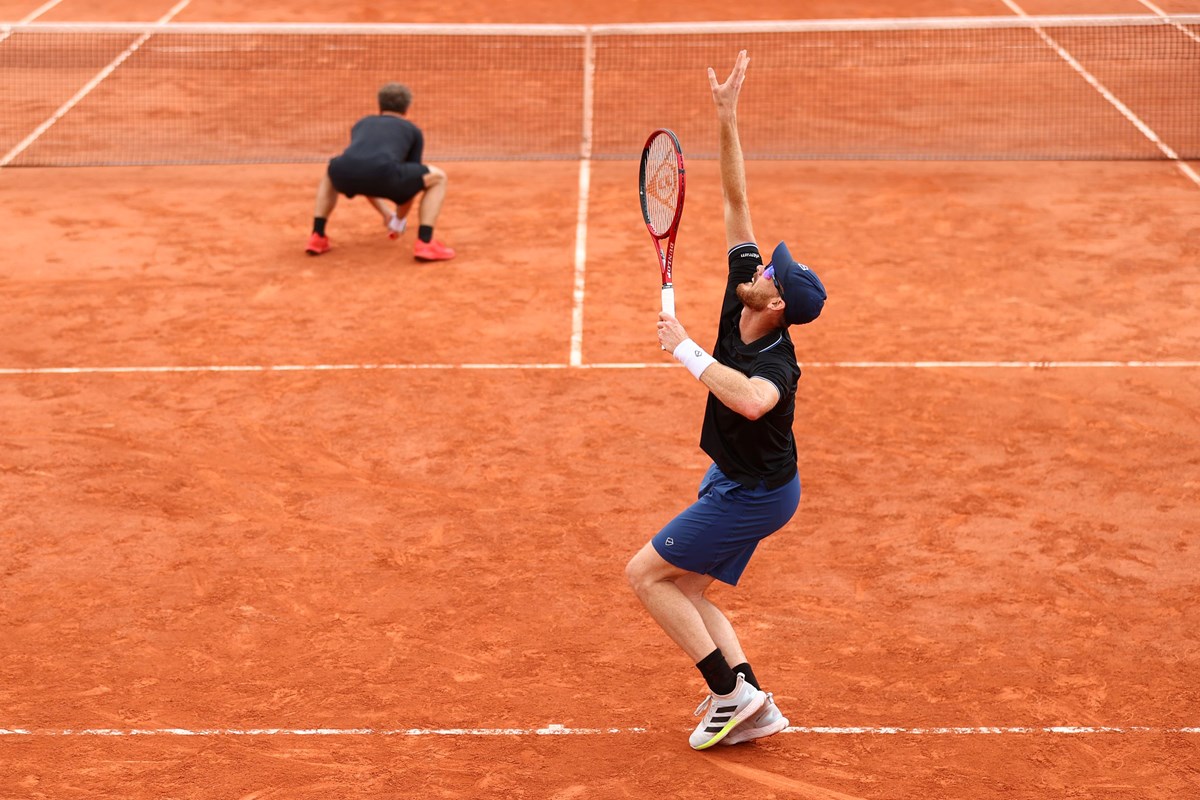 There were five breaks of serve in the opening set of Murray’s match, with the British, Indian partnership initially going 2-0 and then 4-1 down. But in a stunning turnaround, Murray and Bopanna went on to claim five consecutive games to finish the set on top.

The second set was evenly balanced throughout and despite Murray and Bopanna having the chance to wrap it up at 6-5 in the tie-break the Americans came back to force a decider.

With the scores at 6-6 in the deciding match tie-break, Murray and Bopanna showed their doubles experience – sealing the match with four of the last five points.

It was more plain sailing for Salisbury and Ram, who – after a steady start – dealt a hammer blow to Uruguayan, Ecuadorian duo with a double break at 3-2 and then again at 5-2.

Salisbury and Ram come in as the top two doubles players in the world right now and showed their class. The pair didn’t drop a service game all match, winning 85% of points when they landed a first serve in. A single break in the middle of the second set was all they needed to book their place in the final eight. 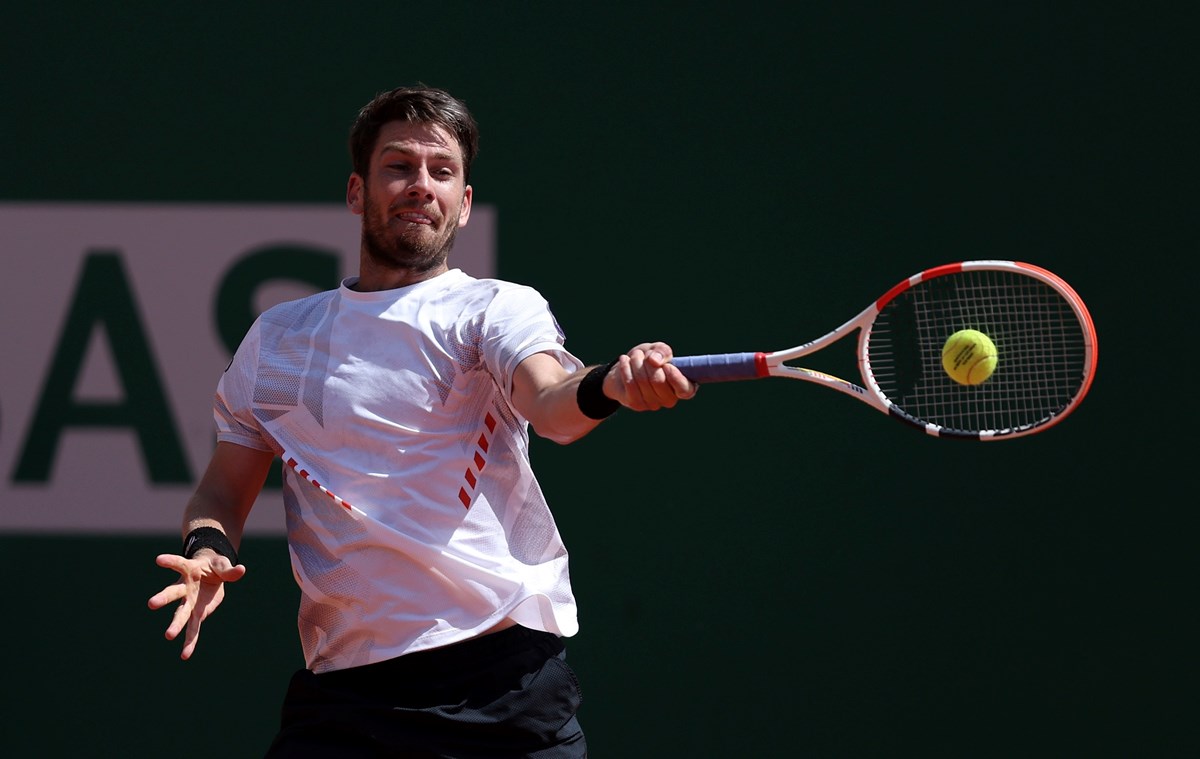 Both Cam Norrie and Dan Evans lost second round clashes at the Monte-Carlo Masters on day three in Monaco.

34-year-old Ramos-Vinolas - who has won all four of his career titles on clay - held off a comeback from British No.1 Norrie to win in two hours and 32 minutes.

After going a set and a break down, Norrie found his spark, breaking the world No.37 three times in a row to level the scores at one set all.

Momentum seemed to have swung in Norrie's favour - but after missing out on a break point opportunity at 3-3, Ramos-Vinolas seized his chance to edge in front and broke Norrie straight away before serving to victory.

Evans on the other hand had to hold off five break points in the opening set against Goffin to force the former world No.7 to a tie-break. The Belgian raced off to a 4-0 and won four of five points on return to wrap up what turned out to be a decisive first set.

The Brit's struggles on serve continued at the start of the second set, where he lost his first three games despite holding off a duo of break points. After falling 4-1 behind, there was no way back for Evans against last week's ATP Marrakech champion, finishing the match in just over two hours. 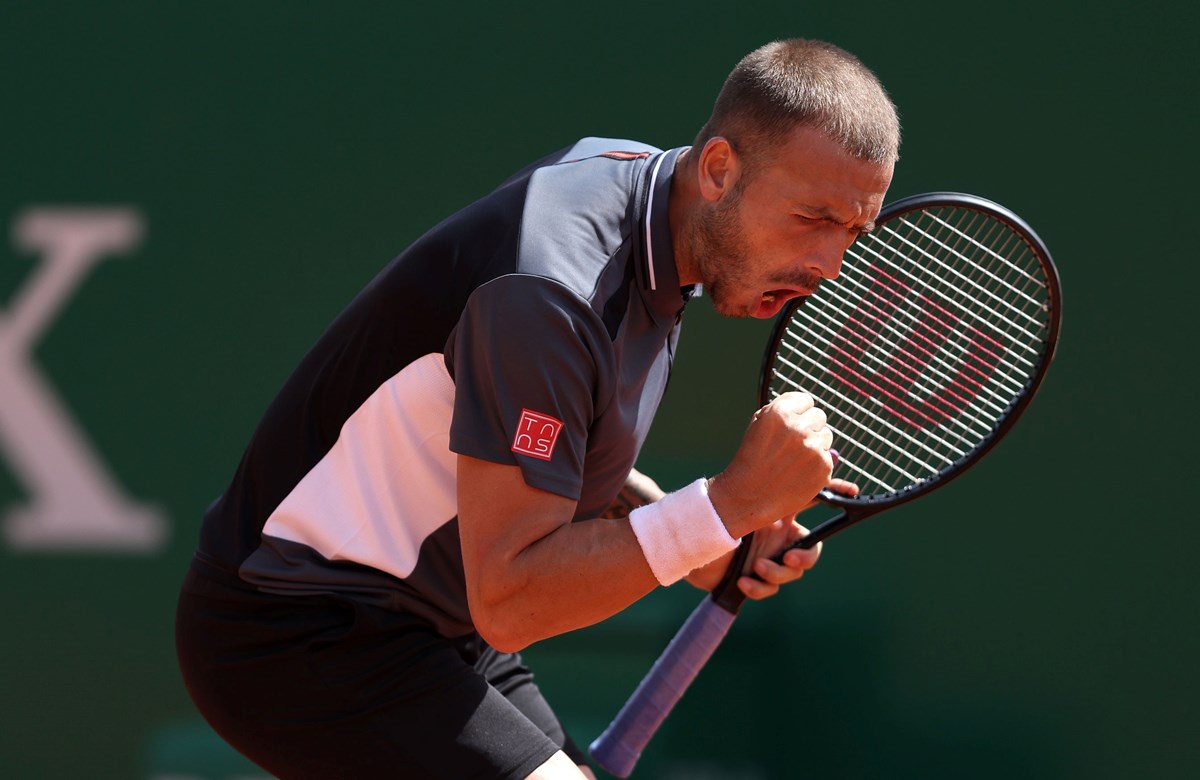 Dan Evans is safely through to the second round with a commanding 6-0, 7-6(4) win over Benjamin Bonzi.

The world No.27 will play either David Goffin or Jiri Lehecka in the second round.

Evans boasts a strong record at Monte-Carlo over the last couple of years - reaching the semi-finals of the singles and final of the doubles last year.

The British No.2 wasted no time in getting up-and-running against the Frenchman, claiming an early double break for 4-0 before dealing the killer blow for a perfect set.

Bonzi bounced back at the start of the second, not only getting on the scoreboard but breaking for a 3-0 lead. However, the world No.63 struggled on serve throughout - hitting only 51% of first serves in and racking up six double faults.

Evans came back charging to level up the scores and force a tie-break. He took the lead from the first point and Bonzi couldn't catch the Brit - finishing the match in an hour and 40 minutes.

Evans then made it two wins from two, as he and Diego Schwartzman beat to Romain Arneodo and Hugo Nys 4-6, 7-5, 12-10 in the frist round of the men's doubles.

Their next oppnents will be third seeds Marcel Granollers and Horacio Zeballos.

The British, Argentine duo missed out on four break points in the opening set and in the second, but with their opponents serving for the match at 5-4, won the next three games on the bounce.

In a close match tie-break, match point opportunities came and went for both sides, but at 11-10, Evans and Schwartzman got the crucial mini break to take the win.

Jamie Murray and Rohan Bopanna came from a set behind to beat in-form duo, Neal Skupski and Wesley Koolhof 2-6, 6-3, 12-10 in a nail-biting first round clash.

Murray and Bopanna got their first victory in their debut match playing together in Monte-Carlo, after Murray's regular partner Soares announced he was taking a short break from the game.

The British, Indian team move on to the second round, where they will play Taylor Fritz and Sebastian Korda.

It was Skupski and Koolhof who started the brighter of the teams, sealing a doubles break and the set, after only losing only two points in the final four games.

Murray and Bopanna had to give a reaction in the second and showed they were up to the challenge. They were broken back after edging 2-0 in front, but found their rhythm on the return and broke again late at 4-3 to level the scores.

They were forced to dig deep once again in the match tie-break with the Miami Open runners-up 5-1 to the good. With the scores level at 7-7 Murray and Bopanna had all the momentum behind them, clinching the match on their third match point.