This week Great Britain are taking on Mexico in the Billie Jean King Cup. Find out more about the women’s team event and how you can follow the action from home.

What is the Billie Jean King Cup?

The Billie Jean King Cup by BNP Paribas is the World Cup of Tennis and is the world’s largest international team competition for women.

This month 16 teams – including Great Britain and Mexico – are competing in play-off ties for a place in the qualifiers for the 2022 Billie Jean King Cup Finals.

Any team who wins a qualifier will then progress to the Billie Jean King Cup Finals – where the top 12 teams will play for the trophy.

When are Great Britain playing Mexico?

The British Billie Jean King Cup team are taking on the Mexicans over two days from Friday 16 April to Saturday 17 April.

They will face off against one another in a best-of-five-matches format with four singles contests and a doubles match.

Where is the tie being held?

The tie is being held at the National Tennis Centre, in Roehampton, England.

Which British players are in the team?

The World No.67 is joined by Harriet Dart, Katie Boulter and Katie Swan, who have all represented Britain in the team event on multiple occasions.

The fifth and final member of the team is Jodie Burrage, who is making her Billie Jean King Cup debut this week.

Find out more about each player here.

What time are the matches?

On Saturday 17 April the first singles match will start 30 minutes earlier then planned, at 11.30 UK time, to make sure players can observe the national minute’s silence at 15:00 in-line with HRH Prince Philip’s funeral.

When is the draw taking places?

The draw for the first day’s matches will take place on Thursday 15 April at 12:30pm UK time.

How to watch Great Britain vs Mexico

Coverage of Great Britain’s Billie Jean King Cup tie against Mexico will be broadcast live on the LTA’s website and YouTube channel - fans can also follow the latest updates in our live blog.

In a UK first, fans will also be able to watch all the matches live on the LTA's TikTok channel.

Live action from the National Tennis Centre will also be available on the BBC via the red button on Friday and on iPlayer across both days. 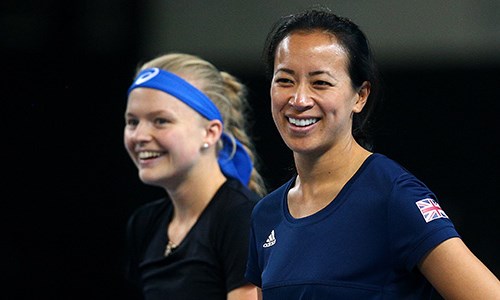