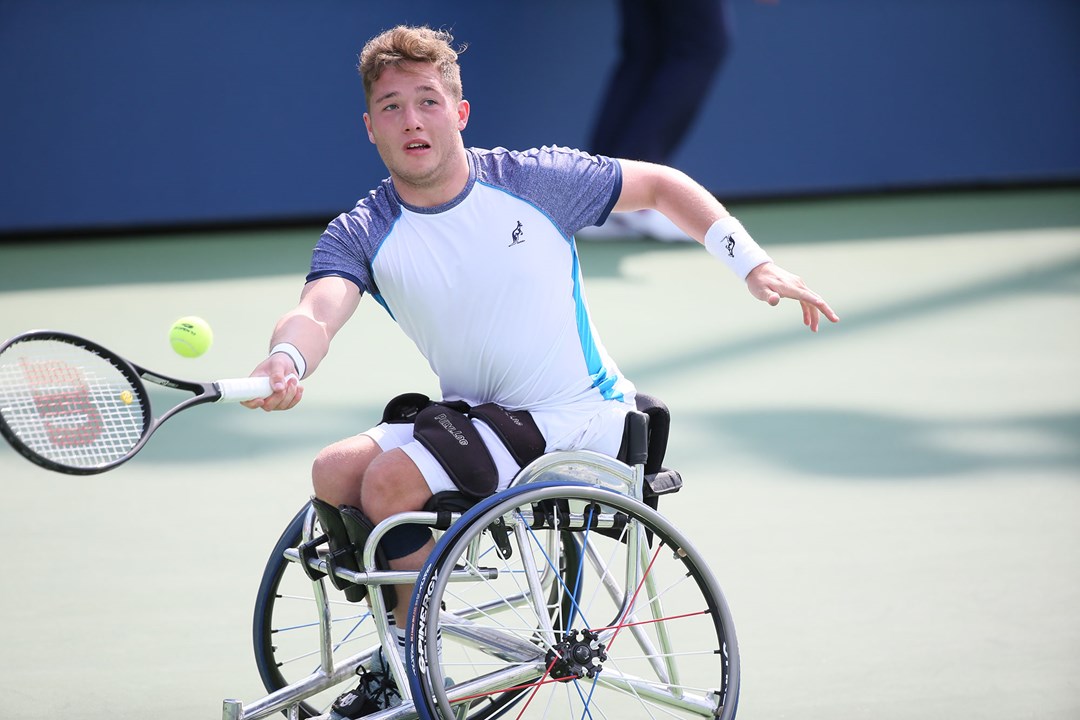 There was disappointment for Alfie Hewett and Andy Lapthorne on the final day of the US Open as the pair lost their respective wheelchair tennis finals, but with British players leaving Flushing Meadow with two doubles titles and two singles runners-up trophies the event has further cemented Great Britain’s status as one of the leading wheelchair tennis nations in the world.

Both Hewett and Lapthorne had gone into the final day of action in New York looking to add singles titles to the doubles titles they had won the previous day.  Norfolk’s 19-year-old world No.3 Alfie Hewett faced French veteran Stephane Houdet in the men’s singles final.  Having lost the first set and finding himself 3-1 down in the second, the teenager’s now famous fighting spirit and never-say-die attitude was fully evident as he turned the momentum around to take the second set 6-4 and force a decider.

Saturday’s play had seen Hewett on court for five hours of high energy tennis, and that perhaps took its toll in the final set.  Clever play from Houdet saw him take some pace off the ball and make Hewett play lots of balls.  IT was a strategy that saw Hewett hit both far more winners but also far more unforced errors than his French opponent, who sealed the title with three games in a row to win 6-2, 4-6, 6-3.

Speaking on court after the match, Hewett, who was making his US Open debut this year, was in positive mood for the future, saying:

Hewett was followed on court by compatriot Andy Lapthorne, who was looking to regain the US Open quad singles title he won in 2014.  His opponent was the USA’s world No.1 David Wagner, the man he had partnered to the doubles title a day earlier, and it was Wagner who took a closely contested first set.  With vociferous support from the stands, Lapthorne fought his way back in to the match, with the in-form Londoner producing some great tennis to take the second set 6-3.

A Lapthorne victory looked on the cards as he earned a deserved 4-2 lead in the deciding set, but Wagner upped his game to win four games in a row and take the title 7-5, 3-6, 6-4.  Speaking after the match, Lapthorne said:

With two doubles titles and two singles runner’s up trophies, this year’s US Open is further evidence of the increasingly strong standing of Great Britain’s wheelchair tennis players within the world game.  Grand Slam titles this year for Lapthorne, Hewett, Gordon Reid and Jordanne Whiley have followed on from performances at last year’s Rio Paralympic Games that saw Great Britain win more wheelchair tennis medals than any other nation.

All of the British players in action in the wheelchair tennis at Flushing Meadow are part of the Tennis Foundation’s world class performance programme.  The search for the next generation of players is already underway with ‘Push2Podium’ events taking place across the country this autumn.

Organised by the Tennis Foundation, Great Britain’s leading tennis charity, the free Push2Podium festivals are open to anyone of any age or ability, and aim to get more people playing wheelchair tennis and identify players who show potential as elite athletes.  Festivals will take place in Newport, Taunton, Portsmouth, Ipswich, Preston, Sunderland, Oxford, Loughborough, London and Glasgow.  Click here to find out more or to sign up for a free place.

For fans who want the chance to see wheelchair tennis played at its very best live, following on from the US Open the world’s best wheelchair tennis players will be showcasing their skills in the UK at the NEC Masters at Loughborough University from 29 November – 3 December in what is the culmination of the 2017 season.