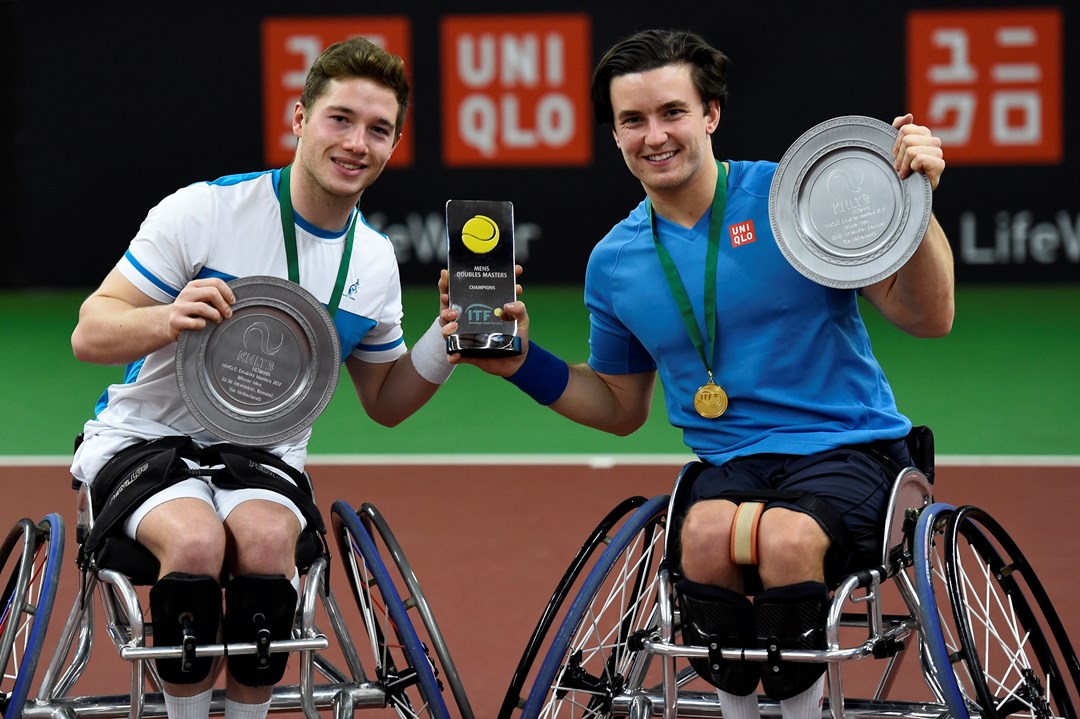 Alfie Hewett and Gordon Reid paired up to add the Doubles Masters title to their Wimbledon and US Open titles. Antony Cotterill and Andy Lapthorne were the defending champions in the quad doubles, eventually finishing runners-up this year. Meanwhile, Lucy Shuker and Louise Hunt partnered USA's Dana Mathewson and Michaela Spaanstra of the Netherlands, respectively in the women's doubles, with Shuker and Mathewson earning third place.

Alfie Hewett and Gordon Reid secured the best possible end to their year in doubles competition with a stunning three-set win over French top seeds Stephane Houdet and Nicolas Peifer in the men's final at the UNIQLO Wheelchair Doubles Masters in Bemmel.

Reid has subsequently regain the world No. 1 doubles ranking and is set to be year-end No.1 men's doubles player for the second time in three seasons..

Meanwhile, Lucy Shuker ended her Doubles Masters campaign om a winning note after the British No. 1 and her American partner Dana Mathewson claimed third place in the women's doubles with a 6-1, 5-7, 6-1 victory over France's Charlotte Famin and South Africa's Kgothatso Montjane.

Hewett and Reid, Shuker and quad doubles finalists Antony Cotterill and Andy Lapthorne now all head to the NEC Wheelchair Tennis Masters in Loughborough, which begins on Wednesday.

In the men's doubles final in Bemmel Wimbledon and US Open champions Hewett and Reid battled back from a set and 2-0 down to defeat Roland Garros champions Houdet and Peifer 1-6, 6-4, 7-5.

“It was another tough one. We never do it the easy way against the French guys it seems, but it was great to pull through in the end and win our first Doubles Masters title together,” said Reid, who had previously won the Doubles Masters twice before, with two different French partners – Houdet and Michael Jeremiasz.

“I think we were sitting too deep in the first set so we just tried to be more aggressive with our movement after that and it was a great comeback and it’s great to win my third Doubles Masters title, this time with Alfie.”

“I think we just remained positive, we knew what we had to do to change the match and it just took us a while to find our rhythm and find ourselves within the match, but after we got a few games on the board we did well,” said Hewett, for whom it was a first Doubles Masters title.

Antony Cotterill and Andy Lapthorne finished runners-up in the quad doubles at this year's Doubles Masters, while Alfie Hewett and Gordon Reid reached the men's doubles final for the first time.

Cotterill and Lapthorne were unable to repeat their win over the USA's Nick Taylor and David Wagner in the round-robin phase of the event as Taylor and Wagner claimed the title 6-4, 6-3.

In the men's semi-finals Hewett and Reid produced a polished performance to defeat British Open finalists Gustavo Fernandez and Maikel Scheffers 6-1, 6-2. They will now face French top seeds Stephane Houdet and Nicolas Peifer for the ninth time this season.

Antony Cotterill and Andy Lapthorne and Alfie Hewett and Gordon Reid ensured they finished top of their respective quad doubles and men’s doubles pools as the round-robin stage of the Doubles Masters came to an end on Friday.

Cotterill and Lapthorne defeated American Greg Hasterok and South Korea’s Kyu-Seung Kim 6-2, 6-2 as they prepared for Saturday’s quad doubles final. Defending champions Cotterill and Lapthorne will now look to repeat Thursday’s round-robin victory over Nick Taylor and David Wagner as the Brits meet the Americans for the second time in three days and for the second straight Doubles Masters final.

Second seeds and Wimbledon and US Open champions Hewett and Reid will play ….for a place in Sunday’s men’s doubles final after defeating Poland’s Kamil Fabisiak and Austria’s Martin Legner 6-4, 6-1 to top Pool B.

However, Louise Hunt’s hopes of reaching the women’s doubles final came to an end when Hunt and her Dutch partner Michaela Spaastra slipped to a narrow 6-4, 6-4 loss to Charlotte Famin and Kgothatso Montjane in their final pool match.

Antony Cotterill and Andy Lapthorne led a full house of three wins from three matches for the Brits on the second day of play in Bemmel as the top seeds ensured their place in the quad doubles final once again.

With two wins from two matches and one round-robin match remaining they cannot therefore finish worse than second in the round-robin and will therefore contest Saturday’s final.

Elsewhere Alfie Hewett and Gordon Reid beat last week’s Bath Indoor champions Joachim Gerard and Stefan Olsson 2-6, 6-4, 6-4 to also remain unbeaten after two matches. Like Cotterill and Lapthorne, they also cannot now finish worse than second in Pool B of the men’s doubles and are therefore through to the semi-finals.

Lucy Shuker and her American partner Dana Mathewson are also unbeaten after their two round-robin matches in the women’s doubles and are also therefore into Saturday’s semi-finals. Shuker and Mathewson beat Charlotte Famin of France and Kgothatso Montjane 6-2, 2-6, 6-3 to top Pool B, which will now see Louise Hunt and her partner Michaela Spaanstra play Famin and Montjane for a place in the last four.

Top seeds Cotterril and Lapthorne will play the USA's David Wagner and Nick Taylor on Thursday in a repeat of last year's quad doubles final after a straight sets win in the first of their three round-robin pool matches. Cotterill and Lapthorne came back from 3-1 down in Wednesday's opening day of play to beat Australia's Heath Davidson and Lucas Sithole of South Africa 6-3, 7-5.

Alfie Hewett and Gordon Reid also made a winning start in the men's doubles, beating Frederic Cattaneo of France and Evans Maripa of South Africa 6-0, 6-1 in just 48 minutes in their first Pool B match. Hewett and Reid face last week's Bath Indoor champions Joachim Gerard and Stefan Olsson next.

Hunt and Shuker were on opposite sides of the net for their opening women's Pool B round-robin contest. After serving for the opening set at 5-3 Hunt and and Spaanstra were unable to upset the second seeds and Shuker and Mathewson went on to secure a hard-earned 7-5, 6-3 win. Shuker and Mathewson face Charlotte Famin of France and Kgothatso Montjane of South Africa now on Thursday in in the three-way pool, with Hunt and Spaanstra set to play the same opponents on Friday.