Tennis today is a multi-billion pound industry with some of the biggest events in sport, but the professional game as we know it has its roots in humbler beginnings. By Alex Sharp

Just down the road from the golden sands of Bournemouth beach, the leafy suburbs hosting West Hants Lawn Tennis Club is where the game as we know it today launched into life.

Tennis in the 21st century is a multi-billion pound industry, broadcast all over the globe online, on TV, social media, and in print.

But cast your mind back 50 years and the sport wasn’t as structured, united, and lucrative as it is today for the likes of British stars Kyle Edmund and Johanna Konta and international names such as Roger Federer and Serena Williams. 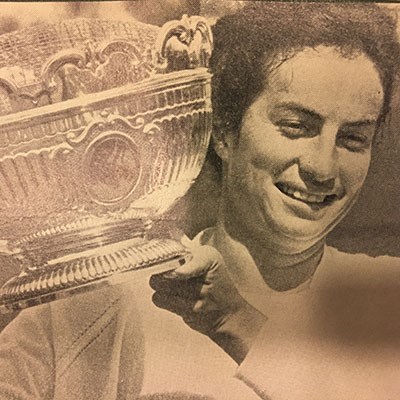 Tennis was traditionally an amateur domain, with a select few professionals – officially accepting prize money – excluded from the Grand Slams and Davis Cup.

So for example, the legendary Rod Laver clinched the 1962 ‘Grand Slam’ of all four Majors, but in going professional was forbidden to play in the key events of the calendar for another five years, highlighting the rumblings between the amateur and professional divisions in the game.

Visionary Herman David, then-chairman of the AELTC, promised that this talented crop could play in the 1968 Championships, should this particular event fill the stands with spectators.

Well, it did and the movement hit its crescendo in December 1967 at an historic AGM at The Queen’s Club, in Barons Court, London. With British tennis leading the way for a united sport, Lawn Tennis Association (LTA) Chairman Derek Hardwick abolished the distinction of amateur and professional players at every British tournament.

The Grand Slams we speak of today all followed suit, but the first event to offer ‘official’ prize money was down on the British south coast in Bournemouth.

On April 22 1968, sports media from around the world descended on the sleepy English seaside town to catch a glimpse of the new ‘Open Era’, to see how the battle-hardened pros would fair against amateurs.

On the men’s side, Britain’s Mark Cox toppled American pro Gonzalez on the hard courts in breezy Bournemouth: “It was huge,” Cox told Racquet magazine. “I think there was even a photograph of myself on the front of The [London] Times, which didn’t happen too often for sports people in those days.

“From the point of view of its impact on tennis and the future of tennis, it proved that the barriers between amateurs and professionals were broken.”

Laver halted Cox’s run in the semi-finals, before fellow cherished Australian Ken Rosewall defied the customary patches of rain to prevail 3–6, 6–2, 6–3, 6–0 and etch his name onto the first Open Era trophy.

Over to the women’s draw and Virginia Wade stormed past Winne Shaw 6-4, 6-1 for the landmark title, but in knowledge that Rosewall received £1,000 prize money, £700 more than her cheque, the Brit refused the offer.

The stark difference in prize money could have been a reason for the absence of the professional contingent of women’s players on British shores, including Rosie Casals and a certain Billie Jean King.

King was the leader of the ‘Original Nine’ who formed their own Tour, fighting for equality in pay between male and female champions.

Their inspiring tussle culminated in former top-ranked Bobby Riggs, then 55-years-old, challenging King, 29, to a prime-time clash on TV in 1973, with a $100,000 winner-takes-all kitty.

Despite the commotion surrounding the event, King won in straight sets with as estimated 90 million people glued to the action worldwide on TV from the packed Houston Astrodome.

The ‘Battle of the Sexes’ match remains one of the milestone moments in women’s sport; “I thought it would set us back 50 years if I didn't win that match,” declared King, who had helped found the current WTA the previous year in 1972 to unite the women’s game under one tour. “It would have ruined the women's tour and affected all women's self-esteem."

Back to 1968 – with the “Open Era” up and running, Rosewall repeated his Bournemouth title run to oust Laver in four sets at Roland Garros and lift the first Grand Slam of the new dawn.

However, Laver would not be denied and completed a second stunning calendar ‘Grand Slam’ in 1969, consolidating the legendary status of the ‘Rocket’.

The men’s ATP professional body, officially set up in 1972, swayed from an Australian flavour to an American roster in the Seventies. John McEnroe burst onto the scene while Arthur Ashe edged his countryman Jimmy Connors in 1975 to rule an historic day, becoming the first black man to win Wimbledon.

The 1968 French Open women’s event saw our own Ann Jones pipped in the final on the Parisian red dirt by American Nancy Richey 5-7, 6-4, 6-1. However, Jones was to taste major success in the Open Era by spectacularly winning Wimbledon in 1969 with victory over reigning champion King.

1977 was a particularly historic year for Great Britain, marking the Queen’s Silver Jubilee. Inspired by the wave of optimism sweeping the country, two-time Grand Slam champion Virginia Wade brushed aside favourite Chris Evert to book a spot in the Wimbledon final.

Ramping up the sense of occasion, it was the tournament’s centenary year. With Queen Elizabeth watching on from Centre Court, Wade fought back 4-6, 6-3, 6-1 to overcome Betty Stove.

“At the end the cheers were loud and deafening,” a jubilant Wade said after the crowd finished a rousing version of ‘Land of Hope and Glory’. “It was like a fairy-tale, with everyone cheering for the Queen and cheering for me.