A number of new players finished on top of the podium alongside some more familiar multiple gold medallists over the weekend at the Tennis Foundation National Learning Disability Tennis Championships 2017 at Nottingham Tennis Centre, an event held in partnership with Special Olympics GB.

With singles and doubles competition between players of a similar tennis ability, only one of the 16 singles draws for the 63 players involved a knockout format. Oliver Beadle and Joshua Kerr reached the semi-finals this year for Division 1, before Anna McBride beat Beadle 6-4 and Luke Turnbull defeated Kerr 6-4. Turnbull dominated this year’s gold medal match, winning 6-1.

The other medals were contested in a series of round-robin events using yellow, green or orange tennis balls depending on players’ ability.

Dickson maintained a perfect record of three wins to take the Division 7 men’s singles gold medal, but had to go to a tie-break to overcome eventual bronze medallist Matthew Brough 7-6(4) in their opening match of the weekend.

Brothers Tomos and Ciaran Bevan took the gold and silver medals in the men’s Division 8 singles after both beating Mark Cooper. However, Tomos secured the gold medal after beating Ciaran 6-0 in the decisive match.

Hopkinson, meanwhile, made it three wins form three matches to finish on top of the podium in the men’s Division 11 singles and ensure a local Nottinghamshire gold medal.

Matthew Copley and Dickson and Scott Brown and Ryan Caven each recorded two wins out of three in their Division 3 men’s doubles round-robin matches. However, Copley and Dickson’s 6-4 victory over Brown and Caven in the head-to-head between the two partnerships meant that they took the gold medal – Dickson’s second of the championships.

After playing each other to decide singles gold and silver medals Ciaran and Tomos Bevan teamed up to earn the Division 4 men’s doubles gold medal after edging through a thrilling decisive tie-break against silver medallists Rhys Parry and Thomas Sewell 7-6(7).

Elsewhere, Max Mundy remained unbeaten in both his men’s Division 2 singles matches, ultimately securing the gold medal with a 7-6(3) win over Robbie Hampshaw.

Three players completed their three round-robin matches with two wins apiece in the men’s Division 3 singles, but Taylor Marsland edged out Alex Hume and Matthew Chilvers for the gold medal with a better percentage of games won against games played, having beaten silver medallist Hume 7-5.

In the doubles events, Beadle and Adam Brownsword edged two tie-breaks to remain unbeaten in their three matches in the Division 1 doubles, defeating silver medallists Joshua Kerr and McBride 7-6(5).

Another tie-break decided the gold and silver medals in the Division 2 men’s doubles as Hampshaw and Michael Hartnett defeated Matthew Chilvers and Mundy 7-6(4) in the crucial contest in their three round-robin matches.

Three of the four partnerships in the Division 5 men’s doubles completed their three round-robin matches with two wins apiece, bringing the percentages of games won against games played in to decide the medals. Ultimately, Damon Hughes and Robert Wright came out on top, winning 68 per cent of their games to take the gold medal ahead of William Farrow and Cameron Long and Alex Hopkinson and Steven Uttley.

However, Hopkinson claimed his second gold medal of the weekend in the Division 2 mixed doubles when he and Frances Smiley dropped just one game across their two matches together.

Lily Mills, Lucy Porteous and Emma Lindsay all emulated their 2016 performances to win the gold medals in the Division 1, Division 2 and Division 4 women’s singles events once again.

Mills made it back-to-back National Championships gold medals in the Division 1 women’s singles, dropping just one game in her two matches against Kerry-Alice Hartnett and Laura Campbell.

Porteous proved even more dominant, winning the Division 2 women’s singles gold medal without dropping a game in her two matches.

Sarah Simpson and Katherine Ashcroft both won two of their three round-robin matches in the Division 3 women’s singles. This meant that the result of the head-to-head between the two players decided the gold medal. Simpson came out on top to win that contest 6-4, having won the silver medal in the same event in 2016.

Lindsay and Laura Wells also won their latest women’s doubles gold medal together after securing back-to-back 6-1 and 6-3 wins in their two round-robin contests.

Mills won her second gold medal of the weekend in the Division 1 mixed doubles, partnering Alastair Ramsey to successive 6-4 wins in their two matches. 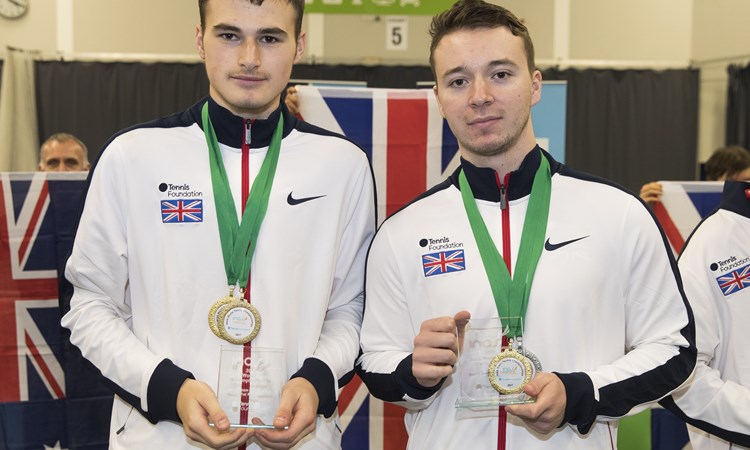