The LTA has announced Rob Cross has been appointed as its new Lead Technical Performance Coach for the GB Wheelchair Tennis Performance Programme.

Cross brings a wealth of experience to his new role, having been involved in wheelchair tennis for 16 years, both as a personal coach and, more recently, as GB Wheelchair Tennis Talent ID Coach.

He was involved with the GB team at both the London 2012 and Rio 2016 Paralympics and has been coach of GB quad and junior teams at the last three editions of the BNP Paribas World Team Cup - wheelchair tennis’ annual Davis and Fed Cup style competition.

Within his role as Talent ID Coach, Cross has also overseen the development pathway of Great Britain’s leading young players, including the creation and launch of the GB Wheelchair Tennis Junior Futures Potential Programme in 2018.

Reporting to the LTA’s Disability Performance Director Matt Hammond, Cross will play a pivotal role in the performance programme for British wheelchair tennis players bidding to earn qualification for the Tokyo 2020 Paralympics.

Reid and Hewett are among a group of players on the GB Wheelchair Tennis Performance Programme who have amassed an impressive number of Grand Slam titles and performances in recent years at the sport’s four majors, as well as elsewhere on the ITF’s UNIQLO Wheelchair Tennis Tour.

Such success at an elite level plays a key role in the LTA’s work to open up tennis to anyone who has an interest in it. The LTA’s programme of disability tennis activity achieved record participation figures last year, making it one of the largest disability-specific sports programmes in the country.

“I am very proud to have been appointed the LTA's Lead Technical Performance Coach for Wheelchair Tennis. It is an extremely exciting opportunity to help lead the GB Wheelchair Performance Programme, which has enjoyed so much success in recent years, and I look forward to working with all the players and coaches in the future.

“We have a very strong performance pathway and the GB Wheelchair Tennis Performance Programme has an extremely bright future as we look forward to the start of the qualification window for the Tokyo 2020 Paralympics this summer.”

“We are delighted to have appointed someone of Rob’s calibre and experience in wheelchair tennis to this role. We have an extremely talented group of players, and with Rob leading our coaching programme I am confident we have exactly the right team in place to build upon Great Britain’s fantastic track record of success.”

The LTA have today announced that seven talented junior wheelchair tennis players have been selected to be part of a new Junior Futures Potential 2 Programme. 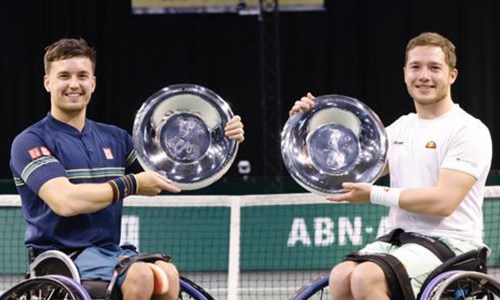