Ready to back the Brits? Tickets are now on sale for the Davis Cup in Glasgow this September
LTA Home News Local charity receives £5,000 for LTA Tennis Award win

A Sunderland-based charity has received £5,000 funding after being named ‘Community Programme of the Year’ at the annual LTA Tennis Awards ceremony last month.

A690 is an innovative youth-based organisation, operating at the heart of the Sunderland community. Created in 2002, the Initiative focuses on supporting young people at heightened risk of social exclusion - offering a wide array of challenging opportunities to over 130 young people per week. It provides activities that might otherwise be denied to young people between the ages of 5 – 19. A690 work in partnership with Headway Wearside to deliver tennis sessions to people who have suffered brain injuries as part of their rehabilitation, sessions cater for a range of disabilities which are held at Sunderland University.

Prior to 2017, A690 didn’t offer tennis listed as one of the activities it offered. That was until they started to deliver the ‘SERVES’ programme in Sunderland, a sport for development programme that takes tennis and its benefits to new people and new places. Two years on, the project now delivers four high-quality coaching sessions per week across three different venues, engaging 83 young participants and involving many who had never been given the chance to play tennis before. It has also provided the opportunity for a number of volunteers to achieve their LTA Level 1 and 2 coaching qualifications.

The charity has taken their approach to tennis even further by getting involved with the SERVES Social Change initiative. Having engaged young people in having fun playing the sport, the initiative then uses that engagement to tackle various social issues that exist in the communities SERVES programmes are delivered in, helping to improve health and build self-confidence.

A690 beat off competition from venues around the country and a record number of nominations to claim their LTA Tennis Award, being named ‘Community Programme of the Year’ in recognition of their outstanding commitment to providing tennis to young people within their community. They are the first ever SERVES site to win an LTA Tennis Award, which were created to celebrate the outstanding contributions to tennis of volunteers, coaches, clubs and community programmes across the country.

There are already plans in place to build on the interest being generated in tennis by A690 among young people in the area and we are supporting the organisation to develop links with nearby Sunderland Tennis Centre, which now runs free weekly community tennis coaching on Saturday afternoons.

A690 were approached to get involved in the SERVES project via StreetGames – one of our national partners. They are one of over 300 community venues across the county now delivering the SERVES programme, with sessions taking place every week at sites as diverse as youth clubs, community centres, church halls, mosques and temples. Over 20,000 young people have been engaged in the programme to date, with half of participants being from BAME groups and more than three quarters from the 30% most deprived communities in the country.

“A690 thoroughly deserved to be named this year’s ‘Community Programme of the Year’ and we’re thrilled to present them with £5,000 in Springfield today. The LTA Tennis Awards are a real celebration of the people that work at all levels of our sport. As a governing body, we can’t achieve our vision of opening tennis and its benefits up to many more people across the country without fantastic initiatives such as this.”

“A690 have been delivering sporting activities since 2002 when the project was first established. There have been various initiatives over the years that use sport as the tool to empower, enthuse and develop young people but nothing has been as successful as the tennis programme. Hearing the news that the project was going to be awarded £5000 was amazing. The funding from the LTA will allow the project to keep all three of our tennis clubs going for the next year and include some new exciting ideas!”

“Congratulations to A690 on their LTA Tennis Award win. It’s been brilliant to come down to the initiative today and see their work in action. Sport really does have the power to transform lives and A690 is proof of that. The LTA are doing great work to make tennis accessible and it’s brilliant to see the impact it’s having here in the North East.”

Head to our SERVES page to discover more about the programme including ways in which you or your community organisation can get involved. 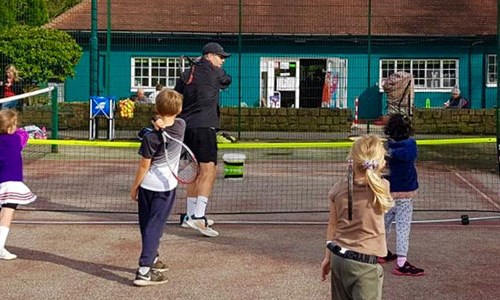