Lying on my bed at the National Tennis Centre and wishing I had some chocolate. Chocolate is good for the forehand.

It's also good when you are tired and hungry. We have just finished the fourth in our series of six camps that are aimed at county level teen girls and female coaches. We need to inspire both. We need a lot more of both.

We started in Bolton last Saturday and then headed to Birmingham. This weekend we did Nottingham and then down to the NTC in London. A total of 62 teens and 23 coaches. The aim is to motivate, share and encourage everyone to keep learning and improving. ‎We have two more in May at Shrewsbury and Halton.

The irrepressible Ellinore Lightbody was tasked with setting these up for me and she in turn handed the inviting of the players to local leads Suzi Riley (Bolton), Leyla Ogan (Birmingham), Hollie Bambridge (Nottingham) and Anna Britton (Dukes Meadow).

The number of players was governed by the number of courts available and a camp involved training in the morning and timed team competition in the afternoon with coaches acting as on court captains. We need more women captaining our county junior girls' teams, so the afternoon session was about team building and strategy. 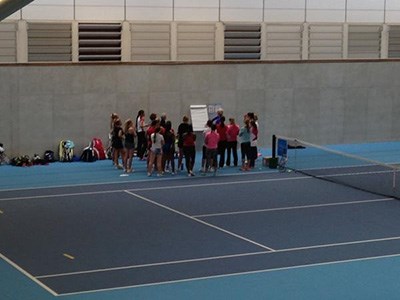 The morning's theme was titled ‘Making You Think’ and involved all sorts of on and off court challenges including lots of lateral thinking puzzles at the drinks breaks.

The flip chart was our Puzzle Page. Eg. What game begins with a T, has 4 letters and is played all over the world? Golf. 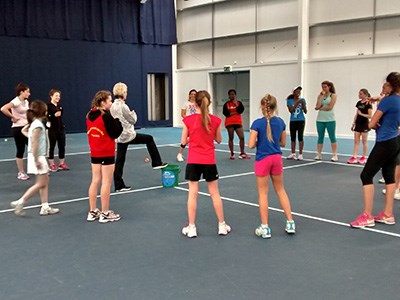 Tennis is a thinking sport so players must engage their brains. And warm up their brains, not just their bodies‎ before they start. Everything we did, bringing in drills, exercises, games and skill builders to make players think.

Here's a four minute clip to let u see some of what we were up to.

So far so good. All seems well received and lots of fun/new ideas for players and coaches‎. There was lots of emphasis on girls working in pairs, teams of three or four, and on being comfortable in the front half of the court. A bit like a volley/smash boot camp :) 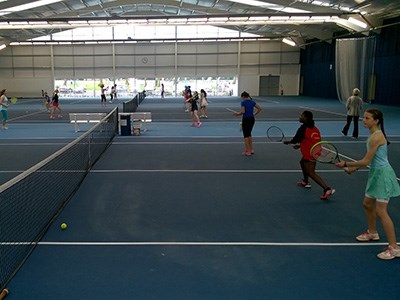 We will be looking to do another series in the autumn, so if you want us to visit your county/indoor centre....let us know. Ellinore.lightbody@tenniswales.org. You just need to provide the courts and a local lead to liaise with Ellinore to invite the players/coaches.

We will do the rest. And we will teach them the important things in life....like the Fed Cup pose :)

If we are ever to have a chance to win the Fed Cup, we need to become a much stronger female tennis nation. That's what these camps and the Miss-Hits programme are all about. Growing the game. Building a workforce. Come on ladies. We can do it!"