Gordon Reid made history again today when the 24-year-Scot old produced a magnificent performance to win his first Grand Slam singles title at the Australian Open after beating Joachim Gerard of Belgium 7-6(7), 6-4 in Melbourne.

However, Reid had to be content with runners-up honours in the men’s doubles as his bid for a second Grand Slam title with Japan’s Shingo Kunieda came to a thrilling conclusion.

However, he went one better after saving a set point in a tense first set tie-break against world No.4 Gerard and putting away his own second set point with a forehand winner. Reid then broke Gerard to love to take a 5-4 second set lead and calmly served out for a memorable victory.

“It’s amazing, I took a couple of seconds to sink in that it was actually match point and it was just pure joy. I heard everyone go crazy and it was joy and a bit of relief,” said Reid, the second player on the Tennis Foundation’s Wheelchair Tennis World Class Programme to win a Grand Slam singles title in successive majors after Jordanne Whiley’s US Open women’s singles title last September.

“When I started 12 years ago I just wanted to get active and healthy again, I never dreamt that I would be here but as time went on I realised I was actually quite good at it. These have definitely been the toughest three matches of my life which makes it even more satisfying.”

“I’ve been working with my coach Karen Ross since I was 15 so a long time, we’ve done everything together and put in so many hours in training together and moments like that make it all worthwhile. Everybody at home was setting their alarms for 2.30am back home to watch it and my phone has just blown up with messages – it’s always amazing to have such great support.,” added Reid.

“I hope my success and the success of all the Brits at this Australian Open will inspire lots more people to pick up a racket and get playing.”

“There are a lot of big events in the calendar this year, we’ve obviously got Rio (Paralympics) and also Roland Garros and, of course, having singles at Wimbledon, which is going to be huge for our sport – to play in front of a home crowd will be great.”

With Reid contesting his third successive Australian Open and sixth successive Grand Slam men’s doubles final he and Kunieda traded the first two sets with French top seeds Stephane Houdet and Nicolas Peifer and the Roland Garros champions won the majority of the big points as they took a 5-0 third set lead and went on to have two match points. However, Houdet and Peifer came back to complete a 6-3, 3-6, 7-5 win after three hours and eight minutes.

“It’s been a long week with some long days after some of the rain delays and originally we were supposed to play our doubles final yesterday. I had an even longer three set match earlier in the week in my singles semi-final against Gustavo and although we are bitterly disappointed we gave everything,” said Reid. 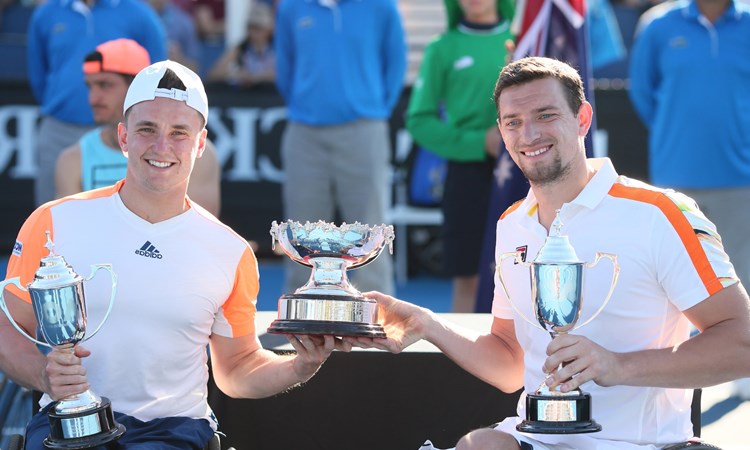