The event kickstarted on Thursday 6 December and 16 players (eight males and eight females) took to the indoor courts to battle for the year-end titles. Players secured their berths by accumulating points from British Tour tournaments throughout the year. The British Tour features a circuit of tournaments set to give up-and-coming and current professional players the opportunity to gain competitive match experience.

Ella Taylor reached Saturday's final without dropping a set and faced Andre Lukosiute for the title. 17-year Andre made use of her strong serves and groundstrokes to take a tight opening set 7-5, but Ella proved resilient and battled back to capture a 5-7, 6-2, 6-2 victory.

After the match, the 23-year-old said: “This is the first time I have qualified for the Masters and I’m delighted to have won the title. Having been based here [at Loughborough University] since October, it was especially nice winning on what are now my home courts, and I really appreciated the support I got from the crowd”.

Following the achievement, Neil said: “I’m really pleased with my performance here and I felt I went up a gear in each match. I always love playing the British Tour Masters and now I can really finish the year on a high. I can look at a good start to the year [in 2019] with the prize money and look at playing more events."

Check out all of the results from the three days here.

Catch up on the results and winners from the end-of-year British Tour Masters. 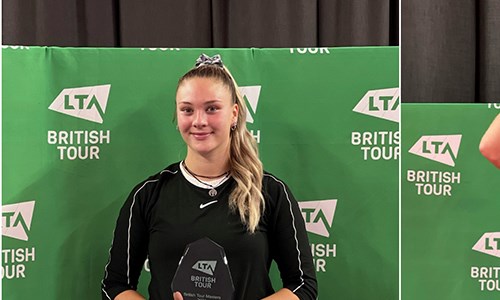