When Johanna Konta won the Miami Open in 2017 – beating Simona Halep, Venus Williams and world No.1 Caroline Wozniacki on the way – her achievement was hailed as the most significant title win for a British woman in 40 years. As a WTA Premier Mandatory event, the Miami Open is one of the largest tournaments outside of the Grand Slams, so it was indeed a big deal for the British No.1. The benchmark was, of course, Virginia Wade’s serendipitous victory at Wimbledon in front of Her Majesty The Queen in Silver Jubilee Year. When it comes to British achievements, Wade’s legendary win sits right at the top.

Who would have thought on that slightly overcast Friday, July 1, 1977 that Wade’s 4-6, 6-3, 6-1 defeat of Betty Stöve in the Wimbledon final would be the last Grand Slam singles triumph for a British woman for, well, four decades and counting?

It was Wade's first and only Wimbledon title, her third and final Grand Slam triumph. And it was so very nearly an all-British final. Golden days, with two Brits progressing to the last four! A tantalising reminder of 1961 when Angela Mortimer beat fellow Brit Christine Truman to win on the grass of SW19. Alas, Sue Barker, the 1976 French Open champion, lost unexpectedly to the Dutch No.7 seed Stöve in a rollercoaster three-set semi-final. Thanks to the royal circumstances, the image of the pink-cardiganed champion holding aloft the Venus Rosewater Dish went on to acquire iconic status (not least because The Queen was wearing a complementary pink tweed and pill-box hat combination) – making Wade’s feat perhaps seem even more unattainable to match.

The closest British tennis fans have come to basking in that patriotic glow was again in 1983, when Jo Durie reached the semi-finals of both the French Open and the US Open. And again in 2017, when Konta carried her hard court form into Wimbledon, beating Halep in the quarter-finals – thereby denying the Romanian the world No.1 ranking – and becoming the first woman to reach the semi-finals on grass since Wade in 1978.

Great Britain still awaits another Grand Slam women’s finalist or champion. It’s a case of keeping calm and rallying on. But here’s the good news. GB ranks third in the table of all-time women’s singles Grand Slam wins by country, courtesy of a tally of 51 championship victories – 31 of which were recorded pre-World War 1. In those days of amateur competition, winning the nation’s premier tournament counted for a lot. In 1889, Charlotte ‘Lottie’ Dod didn’t defend her second Wimbledon title because she’d gone sailing off the west coast of Scotland with her sister and couldn’t be bothered coming back for Wimbledon, but she returned with a vengeance, announcing her determination to win three titles in a row – and duly did in 1891, 1892 and 1893.

Dod’s fifth and final Wimbledon title in 1893 came in defeating Blanche Bingley Hillyard (who now has six Wimbledon titles to her name). This was the same Mrs Hillyard who, years later in 1907, was defeated by Mrs C. M. Wilson in the semi-finals, after a rain delay. “The rain went steadily until 4.30pm, and then the referee told us he should put on a ladies' doubles as soon as it stopped,” she wrote in a letter of complaint to the Daily Mail.

“At that I went into the tea tent, and, at the risk of having to appear positively vulgar, I must tell you what I ate, thinking of course that all chance of my playing in the championship was over: - Two bath buns, six or seven slices of bread and butter, three or four cups tea, six or seven biscuit cakes, two or three slices of other cake. Not satisfied with that, when I went up to the ladies' dressing-room there were some beautiful strawberries provided for the players, and I ate three plates of these… As soon as I had eaten this fearful meal, the referee came and asked me as a particular favour if I would play Miss Wilson… I again refused, and he went away but returned in five minutes, and said a committee meeting had been held over it, and the verdict was I had to play whether I liked it or not.”

On such matters were championship hopes won or lost. Post-war, Britain boast three multi-titled Grand Slam winners: Angela Mortimer (French Open 1955, Australian Championships in 1958 and Wimbledon in 1961); Ann Jones (French Open 1961, 1966, and Wimbledon 1969) and Wade (US Open 1968, Australian Open 1972, and of course Wimbledon 1977). In the Open Era, we have just Wade and Barker to toast as Grand Slam winners.

The history of British women’s tennis is packed with stories to inspire the current crop of British talent. In 1925, Joan Fry got to the final on her Wimbledon debut but lost 6-2, 6-0 to Suzanne Lenglen. In 1949, Gem Hoahing, a 4ft 9in English player of Chinese heritage, went into the record books as the shortest player ever to play at Wimbledon, and grabbed headlines with a famous win over the legendary Gussie Moran. There are a host of one-off Grand Slam champions: Barker, Truman, Shirley Bloomer, Betty Nuthall to name a few.

But consistency is the national trait. At Wimbledon, for example, only four players have played in the ladies’ singles on 20 consecutive occasions – and three were British. Virginia Wade holds the record with 24. The other two, who played 21 each, are Mabel Squire (also known as Mrs Parton and Mrs Mavrogordato), who played 1904-1914, 1919-1928 and got to the semi-finals in 1911 and 1920; and. There Effie Hemmant (Mrs Peters) who played 1927-1939, 1946-1953. She didn’t advance further than the fourth round, but she never stopped trying.

Vote for your favourite!

Head over to the LTA' Twitter to vote for your all-time favourite British player in the Fantasy Women's Singles tournament.

Johanna Konta and Dan Evans have announced that they will not compete at the 2020 Olympic Games in Tokyo later this month. 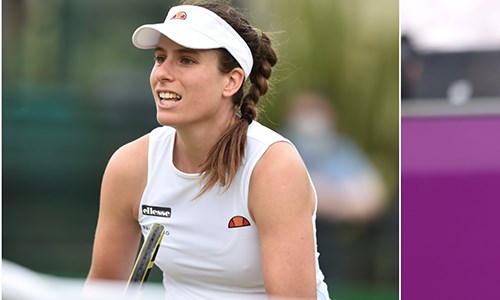