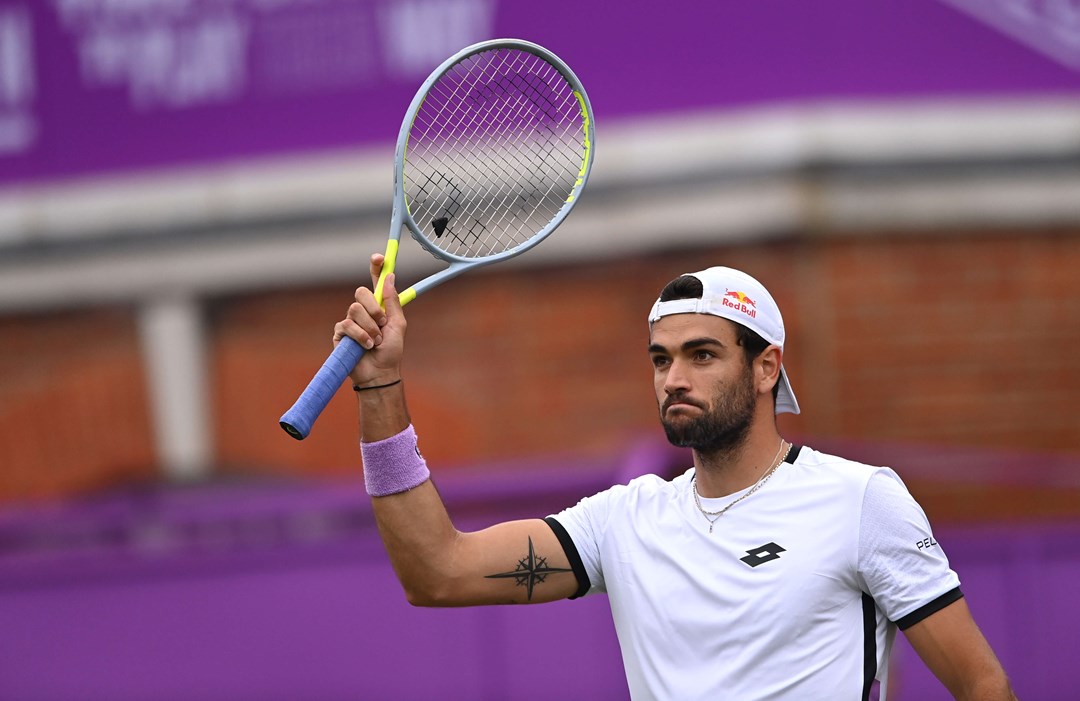 World No.9 Matteo Berrettini overcame British No.1 Dan Evans 7-6 (5), 6-3 to progress to the semi-finals of the cinch Championships for the first time on a rain-affected day at The Queen’s Club.

The fifth day’s play was largely affected by rain delays, meaning the first matches didn’t get under way until 4:30pm, with Evans and Berrettini taking centre stage.

In a competitive match filled with quality, both players went toe-to-toe, bringing out the very best in each other’s game.

Evans – playing in his first quarter-final at The Queen’s Club – had to show his mental toughness early in the contest, saving eight break points in his first three service games.

Berrettini’s serve and all-round power game from the back of the court has been the talk of the week and off the back of a straight sets victory against Andy Murray yesterday, he showed no signs of slowing down.

But the British No.1 was ready to fight for every point, rarely missing a ball and putting his body on the line with a diving volley in just the fourth game.

With no breaks between them, the opening set went to a tie-break. Evans took an early advantage and edged ahead with a mini break, but the Italian came storming back.

Some wonderful net play from the Italian top seed brought him back on level terms and he clinched the set with a crushing forehand deep to the baseline, forcing an uncharacteristic error from the Brit.

Early in the second set Berrettini gifted Evans a rare opportunity to break after a double fault landed him in trouble, but time and again he was able to raise his game.

The hold gave him the confidence to push on and despite the British No.1’s best efforts, he proved too deadly in all areas of the court.

After breaking for 5-3, Berrettini signed off a brilliant win with his 41st ace of the tournament so far – setting up a semi-final clash with fourth seed Alex de Minaur.

“I came here to win the tournament,” Berrettini said. “Obviously you think match by match but that’s my goal.

“Today the conditions were tough, windy, cold, and very different from yesterday so I took time to adapt but I’m happy with my performance.

"I came here to win the tournament."

Statements on and off the court from the top seed this week. #cinchChampionships pic.twitter.com/SYm3T2JuPU

“When you go to the tie-break you never know and it always comes down to a few points, especially on grass. I was returning well and I guess I just played better in the last few points and after that I felt a little more confident.

“My mental attitude has been really good and I’m looking forward to carry on going like this.”

British No.2 Cam Norrie got the better of his fellow countryman Jack Draper in their quarter-final contest with a 6-3, 6-3 victory.

Norrie, who lost to Draper in straight sets in the December edition of the Battle of the Brits, was largely in control against 19-year-old Draper as he won in straight sets

The 25-year-old broke early in the first set – sealing the game with a pinpoint whipped forehand winner down the line to go 2-1 up in the match.

Although Draper did have chances to fight back, the young Brit went 0-40 up with the first set poised at 3-2, he was unable to break down the relentless Norrie who claimed the opener 6-3.

Norrie also struck early in the second set, breaking Draper on his first service game by clinching the game with another whipped forehand winner after a 22-shot rally.

And when Norrie went up a double break there was no stopping the World No.41 from going on to seal his 28th victory on the ATP Tour this season.

Murray to face Paire in opening round

cinch Championships 2021: Murray to face Paire in opening round