Australian Open 2022 wheelchair draw: Hewett and Reid drawn in the same half as British quartet prepare to launch title bids

Read daily updates on the British stars at the Australian Open

Alfie Hewett and Gordon Reid could meet in in the men’s singles semi-finals at the Australian Open after the two Brits were drawn to play Gustavo Fernandez of Argentina and Stephane Houdet of France on Sunday’s opening day of wheelchair tennis competition at the first Grand Slam of 2022.

Hewett and Reid have both beaten World No.3 Fernandez at the first two tournaments of the year before facing world No.1 Shingo Kunieda in the finals of the Victorian Open and the Melbourne Open, respectively. Hewett won his fifth career Super Series singles title earlier this week when Kunieda retired at 4-4 in the first set of their Melbourne Open final.

World No.4 Reid, who won the first Grand Slam singles title of his career at the 2016 Australian Open, said: “It’s been a challenging last couple of the months back home with injuries, so my time on court’s been limited but it was a good effort to get to the final in the first tournament of the year (at the Victorian Open).

"I’ve got a good record against Stephane recently and it will be a tough challenge but I’m looking forward to getting out there.”

Hewett and Reid - who made history in 2021 by becoming the first men’s wheelchair doubles partnership to complete a calendar Grand Slam as they extended their winning sequence to eight Grand Slam titles in a row - begin the defence of their Australian Open title on Monday against Tom Egberink of the Netherlands and Ben Weekes of Australia.

Lapthorne, who is a two-time US Open men’s singles champion, returns to Melbourne Park on the 10th anniversary of winning his second successive Australian Open quad doubles title with fellow Brit Peter Norfolk. Also a multiple Australian Open quad singles finalist, he will play wild card entry Ramphadi for just the second time when he opens his latest title challenge on Sunday.

Lapthorne said: “I’ve been hitting the ball well in training and had a good winter break.

"I remember coming here as a 19-year-old and it’s 10 years since I won the second of my doubles titles with Pete (Norfolk) and I’m looking forward to using my experience to get me through that first match against Donald. He’s obviously going to be excited to be here and he’s going to be hitting the ball big, so I’m going to need to be ready to go.”

Lapthorne partners American David Wagner in the quad doubles. Together they are three-time Australian Open doubles champions and in 2021 they won the French Open and Wimbledon doubles titles, making history as they became the first quad doubles partnership to complete a career Grand Slam together.

Lapthorne and Wagner play Ramphadi and Japan’s Koji Sugeno on Monday in a bid to reach another Australian Open final.

Also women’s doubles finalist at Wimbledon in 2021, Shuker renews a doubles partnership with Japan’s Yui Kamiji that has seen them reach four finals and win two titles in six tournaments together. Second seeds at Melbourne Park, Shuker and Kamiji play Zhu and Jiske Griffioen of the Netherlands in Monday’s scheduled women’s doubles semi-finals.

Shuker, who recently returned to the British No.1 spot, said: “I’m really excited to be amongst the world’s best players competing at the first Grand Slam of the year once again. These are the opportunities we work so hard for and I want to give it my all and make the most of it.”

Hewett, Reid, Lapthorne and Shuker are all supported by the LTA’s Wheelchair Tennis Performance Pathway. 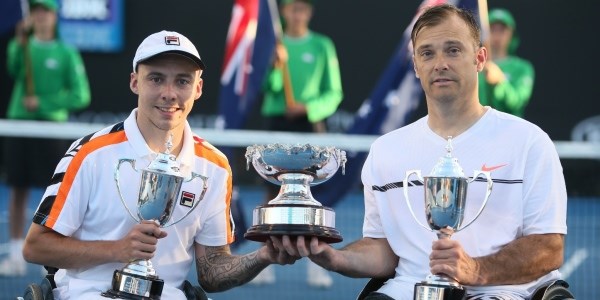