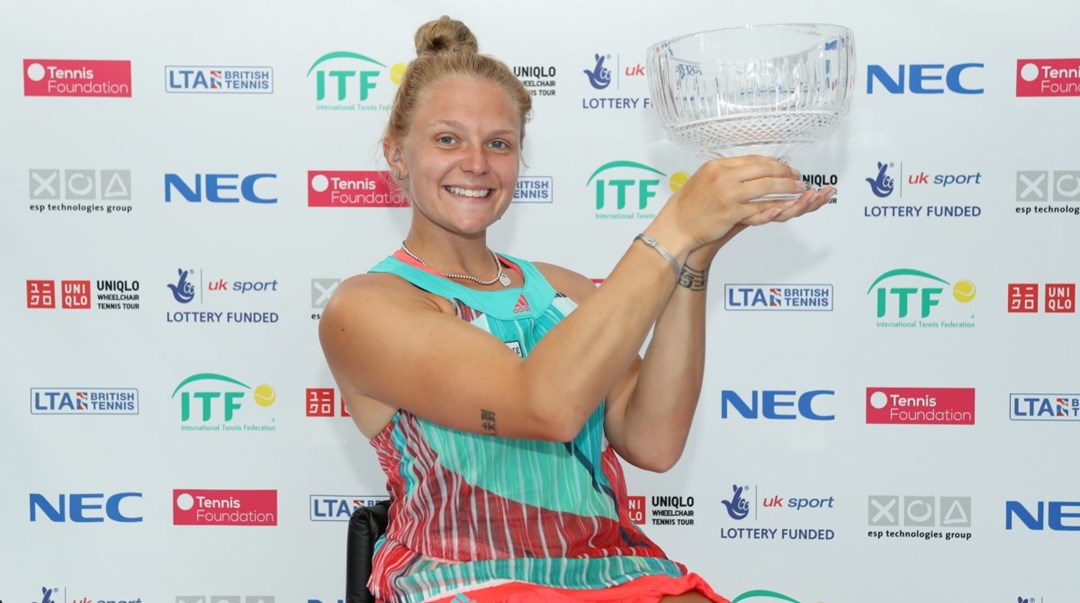 Whiley raced into a 3-0 first set lead as she faced world No.3 van Koot in the British Open final for the second successive year.

Despite van Koot coming back to get to within a game of the world No.4 ranked Brit, Whiley reeled off eight games in a row to wrap up the second Super Series singles title of her career 12 months after landing her first in Nottingham.

“It was tougher than the score line suggests. Three and love sounds like a beating but it was tough today,” said Whiley. “Aniek is a tough opponent because she has that big forehand and a solid backhand. Today I felt like I played really well, I used the court well and didn’t get over excited and start hitting big, I just placed the ball well and hit my spots. I came here to make a mark and say to everyone that I’m a competitor for gold in Rio and I think I’ve done that by beating everyone and winning the title.”

On a busy day of finals at Nottingham Tennis Centre Dylan Alcott claimed the quad title with a 6-2, 6-2 victory over David Wagner. The world No.1 was too powerful for Wagner as he claimed his second British Open quad Singles title.

“Two years ago was my first big title, so that was a big milestone. Today was awesome, I played really well and it’s a good lead into Rio,” said Alcott.  “I’ve had some really tough matches the last few weeks against a lot of the top guys. I had a massive scare in the semis against Lucas (Sithole), so I was happy to get the win there and then played really well today.”

In the day's other final Wimbledon champions Gordon Reid and Alfie Hewett were unable to repeat their heroics from two weeks ago as they succumbed to a 6-2, 6-1 loss to the French pairing of Stephane Houdet and Nicolas Peifer. In a repeat of the Wimbledon final the French pairing coped with the difficult wind on  centre court better to claim their first British Open men’s doubles title together.

In the men’s singles British hopes came to an end as Wimbledon champion Reid lost out to world No.3 Joachim Gerard of Belgium. Gerard, runner up at the British Open in 2015, edged past Reid 6-4, 7-6(3).

“I thought I played well, it’s just that Jo played the bigger points a little bit better,” said Reid. “It came down to a few points, the same as our other matches this year. They’ve all been pretty tight and in the others ones I’ve had the better of him on the big points and he did the opposite to me today.”

Gerard will play world No.1 Stephane Houdet in a repeat of the 2015 final tomorrow. Tomorrow will also see the women’s doubles final and British pair Andy Lapthorne and Jamie Burdekin go for glory in the quad doubles final.