Reid made a confident start to the defence of his Paralympic title, defeating South Africa’s Leon Els 6-2, 6-0. After his first round bye Reid made it three wins from three matches against Els as he moved on to the third round.

Rio Paralympics men’s singles gold and silver medallists Gordon Reid and Alfie Hewett eased into the third round of the Tokyo 2020 wheelchair tennis competition on at Ariake Tennis Park as ParalympicsGB players won five of six matches across the men’s, women’s and quad singles events.

Reid made a confident start to the defence of his Paralympic title, defeating South Africa’s Leon Els 6-2, 6-0. After his first round bye Reid made it three wins from three matches against Els as he moved on to the third round.

Two-time Paralympic doubles bronze medallists Jordanne Whiley and Lucy Shuker were also in fine form as they kicked off their singles campaigns in Tokyo. Fourth seed Whiley put up a strong performance beating Colombian world No.9 Angelica Bernal 6-0, 6-3 and will now play Japan’s Manami Tanaka for a place in the quarter-finals.

Shuker secured her first 6-0, 6-0 singles win in four Paralympics as she powered past Turkey’s Busra Un and the British No.2 moves on to play Zhenzhen Zhu of China.

Rio 2016 quad singles silver medallist Andy Lapthorne secured crucial breaks midway through both sets of his first round match against Canada’s Parapan American Games gold medallist Rob Shaw to prevail 6-3, 6-3 in an hour and 19 minutes. After making it six wins from six career matches against Shaw, Lapthorne will play Dutchman Niels Vink for a place in the semi-finals.

Lapthorne will be among the Brits in action on Sunday when he partners Antony Cotterill in the quad doubles semi-finals. However, Cotterill’s quad singles challenge is over after he bowed out to Australia’s world No.7 Heath Davidson 6-1, 6-0.

Norfolk’s historic career saw him become Britain’s most successful Paralympic wheelchair tennis player of all-time; leaving behind him a legacy that will last for many years. 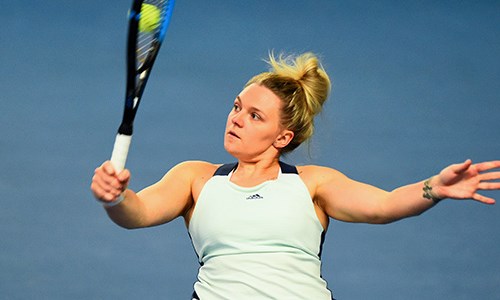