Tennis coach Mark Bullock has been crowned a national winner at the prestigious LTA Tennis Awards.

Bullock scooped the LTA’s Development Coach of the Year Award after being recognised for his inspirational on-court delivery and nurturing the next generation of tennis players.

Bullock, who operates in the Middlesex Tennis region in London, has adapted innovatively to the demands of the Covid-19 pandemic, made tennis more welcoming and accessible and demonstrated key values such as teamwork and leadership in his wide-ranging role.

He was announced as the winner by Judy Murray OBE at a live-streamed awards ceremony presented by Great Britain Davis Cup captain Leon Smith this evening.

And Bullock was hand-picked as one of 16 national winners recognised at the awards ceremony, which honoured individuals involved in tennis at grassroots, county, regional and national level.

Nominations were drawn from over 25,000 volunteers, nearly 5,000 coaches and 1,000 officials, 22,000 schools, nearly 3,000 clubs and over 9,000 LTA approved tournaments, with Bullock recognised for his inspirational work in the Middlesex region.

Bullock is a pioneer in the delivery of inclusive tennis. He coaches wheelchair, visually impaired and learning disability tennis sessions and during lockdown he produced tennis related content for YouTube and social media channels, as well as appearing on several podcasts.

He’s helped blaze a trail for disability sport at Sheen Park Tennis, delivered pop up tennis for the homeless in Hammersmith and was part of a coaching team that delivered a face-to-face Wheelchair Tennis Camp at Lee Valley following a series of online sessions.

And the Development Coach of the Year award goes to @mark___bullock

Monmouthshire’s Kari Davies tailors her sessions to provide a variety of drills and activities to suit all abilities, and has had particular success engaging those who have Special Educational Needs. She kept spirits high during lockdown with online challenges which were open to the whole community and showed great initiative when forced to use a local football field for her sessions while the normal courts were being refurbished.

Alex Guzder’s welcoming approach has led to considerable growth in the size of the coaching programme at his club in Leicestershire. During lockdowns, he ran a number of online sessions including daily home challenges, zoom squad sessions, quizzes and bingo and he helped to raise thousands of pounds for the club’s disability programme and the NHS.

Meet the coach taking tennis into mosques in Bradford 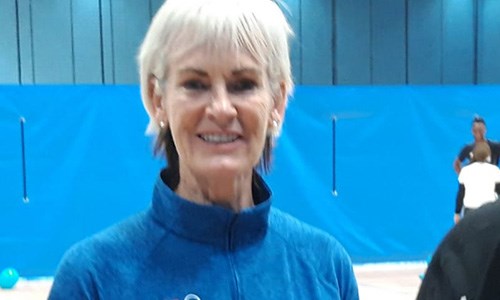