Go Jo Ko! Johanna Konta landed her maiden WTA title by beating Venus Williams at the Bank of the West Classic in Stanford with the victory seeing her rise to a career-high No.14 in the world!

Playing in her first ever WTA final, the British No.1 overcame a fightback from the seven-time Grand Slam champion to win 7-5, 5-7, 6-2 in two hours and 20 minutes.

Konta’s WTA Premier title means she joins Heather Watson as a British winner on the tour in 2016 after Watson’s victory in Monterrery added to her previous wins in Osaka and Hobart.

The Australian Open semi-finalist looked on course for a confident straight sets win after breaking the World No.7 four times on her way to taking the opener and racing to a 4-1 lead in the second.

But Williams, one of the all-time legends of the game, came roaring back to win six of the next seven games and ensure the final went to a decider in sunny Stanford.

Konta, who was ranked No.147 in June last year, was on a mission though and again powered into a commanding lead.

At 5-2 up she served for the title and an epic game saw Williams force three break points and save two match points before getting over the line. 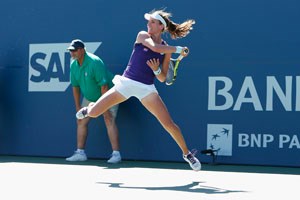 The No.3 seed said after: "It's quite an incredibly humbling experience. It's a validation of all the hard work you've already put in.

“I wanted to leave it all out there, but also absorb everything that I could possibly reinvest in my career moving forward.

"I've played her twice before and knew I'd be playing a magnitude of experience. Venus Williams doesn't need an introduction."

Sue Barker was the only previous British winner in Stanford, beating compatriot Virginia Wade in 1977

Konta’s route to a first title

Congratulations @JoKonta91 on your 1st @WTA title 🏆. It was only a matter of time with the way you have been playing! Many more to come x