When the world ground to a halt in March tennis clubs across Britain were forced to close – but Neil Frankel was determined to keep providing in any way he could.

Neil, a Disability Tennis Manager at Riverside Tennis Club, in Bedfordshire, was all set to launch a new initiative for young adults with disabilities before the Coronavirus Pandemic changed everything. The Satellite Club Project was set up to provide young people with an opportunity to stay active, whilst helping to build confidence and real-world skills.

Motivated not to give up on the project, Neil and his team took their project online, organising tennis sessions to keep his group healthy physically and mentally.

“For lots of us it was a challenging time but mental health-wise we felt we had to do something” he said.

“A week before lockdown we were meant to start a lot of these sessions face-to-face and as soon as we found out that the club was going to shut, we went on a big push to try and support the community and our players.

“It was really interesting because I had never met anyone and had no idea about their ability, so we delivered different sessions for different abilities.

“It was a good first step for the players to get involved because they could just dip in and out and build familiarity with us so when you come face-to-face you’ve already broken down that barrier.”

Having to adapt to new ways of working has been a challenge for everyone this year and Neil highlights why delivering coaching sessions virtually to the young adults at home wasn’t always plain sailing.

“Like a lot of people I’d never used Zoom before, I’d never done a Facebook Live,” he said. “I’m usually a confident guy but when you turn the camera on yourself and there’s no reaction it’s quite tough. For the first few sessions I had so many notes behind the screen it was almost like a word for word script.

“Eventually you get comfortable with the way you deliver it and at the end of the day if I can’t make a bit of a fool of myself for an hour whilst there are people doing incredible jobs in the NHS, that’s the least I can do.”

Neil’s first tennis session back in May attracted 21 participants and has continued to grow since then, with both players and their parents saying how important they’ve been.

“The coaches exercise routines are great because it gets you up and going and keeps your mind busy. It’s great for me because I can challenge myself to train harder and keep a positive mind-set”, said one of the young players involved in the project.

As England comes out of a second lockdown and tennis courts begin to reopen again, Neil has had chance to reflect on the project and has outlined his plans to take it forward in the future.

“My overall goal is just to keep the group together and galvanise the team. I want them to know that when they’re on court they’re there to have fun but also work hard and have something to work towards.

“Long-term, it might not be that they choose to play tennis but I want to continue to give people the opportunity to maybe explore other things as well. If one of those people continues to play the game and goes through to join say a cardio session or something like that, I would be absolutely made up.”

Riverside Tennis Club and the Satellite Club Project are supported by the LTA’s Open Court disability tennis programme. This has grown to become one of the largest of its kind across any sport, seeing a fivefold increase in disability tennis participation since 2012.

The Satellite Club Project is run in partnership with Transitions UK, a charity that supports vulnerable young people aged 15-24.

Humans of the Court: Claire's Story 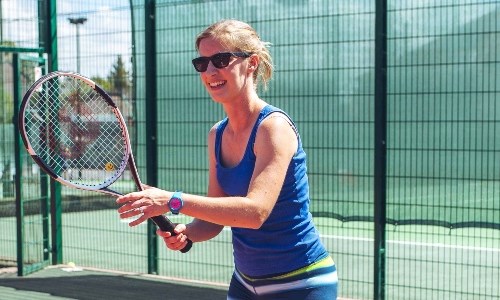 The LTA has reiterated its commitment to helping disabled people get active and play tennis through its sector-leading Open Court programme.