World No.2 Hewett beat Argentinean second seed Gustavo Fernandez 7-6(6), 4-6, 6-4 to seal his second men’s title at the Singles Masters after becoming the youngest ever winner of the year-end championship in 2017, when he was 19.

The 23-year-old British No.1, who struggled with his serve early in the match before coming from 5-2 down and saving four set points to take the first set on the tie-break, said;

“I don’t think it was my strongest performance today but that final game at 5-4 in the third, it all seemed to come together then and that’s when I needed it most. I’m obviously very happy to take this title, it signifies a lot of hard work behind the scenes.

“It was almost like a boxing match – who can land the biggest punch and the right punch, as well, because you can hit as hard as you like, but if you hit it into his zone it’s going to come back twice as heavy,”

While Fernandez took the last three games of the second set, Hewett again battled back in the final set, this time from 3-1 down. He broke Fernandez to earn the chance to serve out the match and drew three successive errors off the Argentinean’s racket to set up triple match point before delivering one last forehand winner after two hours and 55 minutes of enthralling tennis.

With eight of the world’s top players qualifying for the year-end Masters, Hewett and Reid were drawn in the same round-robin group. Hewett finished top of the group unbeaten in his three matches and Reid also advanced to the semi-finals in second place, his only loss in the group coming against Hewett.

Another doubles title for Hewett and Reid 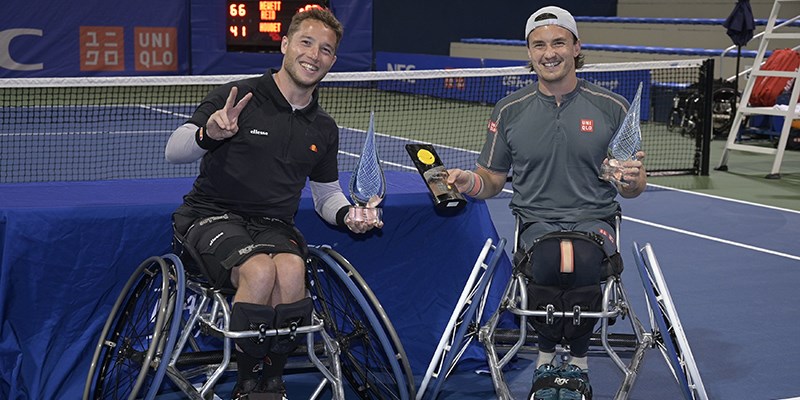 Hewett and Reid, among the players supported by the LTA’s Wheelchair Tennis Performance Pathway, once again proved a dominant force as doubles partners as they won the UNIQLO Doubles Masters end of season title. The win adds to their list of success from a year that saw them take their tally of Grand Slam titles to 13 and become the first men’s doubles wheelchair tennis partnership to complete the calendar Grand Slam.

The top seeds won all three of their Doubles Masters group matches and their semi-final in straight sets to set up a title decider against French second seeds Stephane Houdet and Nicolas Peifer. While Houdet and Peifer beat Hewett and Reid to the men’s doubles gold medal at the Tokyo Paralympics in September, the Brits rarely looked in trouble in their latest meeting and they repeated their win over the French pairing in the 2017 Doubles Masters final 6-4, 6-1.

Calendar Slam, Silver Paralympic medal, Masters title and an end of year number 1 pair. Canâ€™t quite believe what a year weâ€™ve had out there. @GordonReid91 Itâ€™s been an absolute pleasure to be on this journey with you, whatever happens next I can pic.twitter.com/8CPHd1869q

Reid, for whom it was a second Doubles Masters title with Hewett, but a fourth title overall, said:

“I think we picked it up at the start of the second set. We had a couple of tight games and it was quite important that we won a couple of games against the wind early on, because it was difficult down one end of the court. But apart from the 4-0 game we closed it out pretty well. It was cold and it was windy and pretty quiet, being so late, so we were glad to get it over with in straight sets.

“We were patient and we built the points pretty well and against the wind we hit out well and defended well and those were key to the win.”

To recap the action from the NEC Wheelchair Tennis Masters and the UNIQLO Doubles Masters, visit our daily updates page from the event.