The Monte-Carlo Rolex Masters provided a stunning setting for many of the British players’ first clay court event of the season. 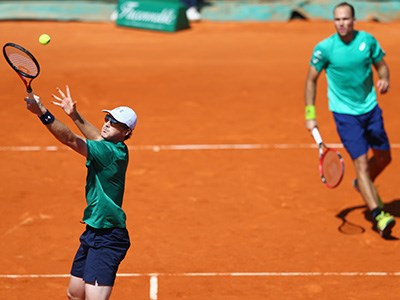 The Monte-Carlo Rolex Masters provided a stunning setting for many of the British players’ first clay court event of the season.

Jamie Murray retained his World No.1 ranking with a successful run through to his first ever ATP World Tour Masters 1000 final with partner Bruno Soares. After having to save match points in Round 1, they battled to the final but it wasn’t to be for the British-Brazilian pairing, who were edged out by the in-form Frenchmen Pierre Hugues-Herbert and Nicholas Mahut 4-6, 6-0, [10-6].

Britain’s No.1 Andy Murray was in singles action and after a couple of close matches, crushed Canada’s Milos Raonic 6-2, 6-0 to make the semi-finals of the prestigious event. His run was ended by King of Clay and eventual champion Rafael Nadal who took a 2-6, 6-4, 6-2 win on his way to his ninth Monte-Carlo title.

Harriet Dart won her second straight doubles title at the $10,000 Antalya, this time with fellow Brit Emily Arbuthnott The pair powered through the field without dropping a set and crushed Russian Anastasa Gasanova and Georgian Ana Shanidze in the final 6-1, 6-0

Lloyd Glasspool had a great run in Heraklion at the F4 Futures event. Glasspool made the final of the singles losing out 6-2, 7-5 to No.1 seed Yannick Mertens of Belgium and with partner Ed Corrie, made the final of the doubles. The British duo sailed through to the final without dropping a set, but were ultimately denied the title by No.1 seeds Ukranian Vladyslav Manafov and Australian Bradley Mousley, going down 6-2, 6-3.

Katie Boulter had a strong showing in the doubles at the $10,000 Sharm El Sheikh last week reaching the final with Ukrainian partner Oleksandra Korashvili. The pair breezed through the initial rounds, knocking out the No.1 seeds in the quarter-finals in straight sets, but just fell short in the final losing to Austrian Melanie Klaffner and German Julia Wachaczyk 6-4, 2-6, [13-11].

March’s Aegon Junior Player of the month, Emily Appleton, continued her fine form this season with a win in the doubles at the Grade 2 Open d’Istres. Appleton and Swede Mirijam Bjorklund took the title without losing a set, winning 6-3, 7-6(2) against Weronika Jasmina Forys of Poland and Czech Johana Markova.

In the grade 4 event Aidan McHugh prevailed to take the singles title over Frenchman Marceau Courtalan 7-5, 6-4, dropping only one set in the quarter-finals.

No.1 seed Nell Miller also cruised into the final of the Girl’s event, troubled only in her semi-final, but stormed to victory in the final 6-1, 6-1 against Giulia Morlet of France.

Jack Draper and Jake Hersey battled through a strong field to reach the doubles final where they faced another British pairing, Rahul Dhohia and Robert Leck. Draper and Hersey prevailed 6-1, 6-4.

Louis Davey made the final of the singles at the 12 and under Grade 3 Bressuire event. Davey was denied the title by Sean Cuenin of France who won 6-4, 6-1.

Davey was able to triumph in the doubles however alongside fellow Brit William Jansen. The pair made it to the final without dropping a set and produced a 6-3, 3-6, [10-6] win over Moroccan Hamza El Amine and Lucas Phanthala of Hong Kong.

There were several strong showings at the Nike Junior International tournament in Nottingham.

In the grade 3 event, Kylie Bilchev won both the singles and the doubles titles. In an all British singles final, Bilchev triumphed over MJ Changwereza 7-6(2) 7-6(4) in a close battle and then alongside Russian partner Iuliia Asanova, she picked up the doubles after a hard-fought victory over the British pairing of Monica Raviaj and Holly Staff 5-7, 6-2 [10-7].

Ben Heynold made the final of the Boy’s Singles, narrowly losing out to Alexander Gilisen of Belgium 6-1, 1-6, 6-4 but there was victory in the doubles for Toby Samuel and French partner Timo Legout, who took out the Belgium team Alexander Gilisen and Noah Martens 6-4, 3-6 [10-8].

Teams announced for the Battle of Brits Team Tennis

Teams announced for the Battle of Brits Team Tennis