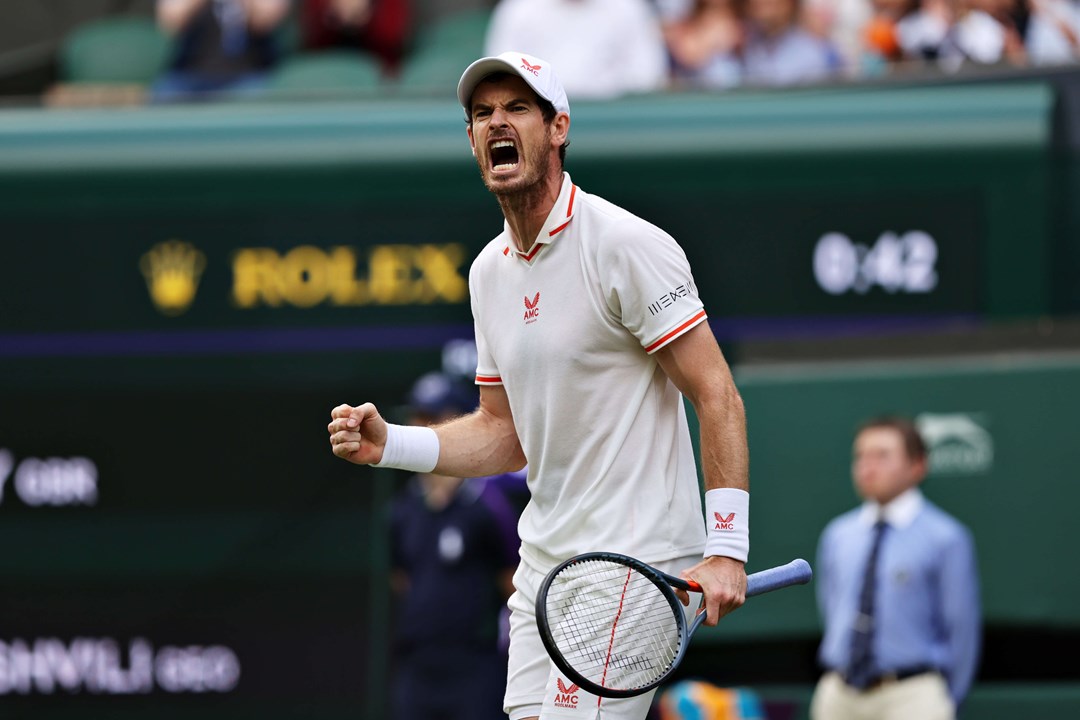 Andy Murray's tennis career is one of the most decorated and talked about in the history of the sport. From the highs of Grand Slam titles and reaching World No.1 and the setbacks that almost ended his career - we take a look back at his tennis journey to date as he gets back to the top of the game.

March 2005 – After being side-lined by a back injury for three months, Murray became the youngest player – aged 17 – to represent Britain in the Davis Cup.

June 2005 – Given a wild card to play at the Queen’s Club, where he progresses to the third round before having to retire with cramp and a twisted ankle.

July 2005 – Following his exploits at Queen’s, Murray is handed a wildcard for Wimbledon – where he also impresses – reaching the third round where despite being two sets to love up he would eventually lose to 2002 finalist David Nalbandian after suffering cramp and fatigue.

February 2006 – Becomes British Number 1 for the first time – ahead of Greg Rusedski and Tim Henman.

April 2007 – Breaks into the world’s top ten for the first time.

May 2007 – Snaps a tendon in his wrist at the Hamburg Open, forcing him to be out of action for three months.

June 2009 – Becomes the first British player since 1938 to win at Queen’s Club, defeating America’s James Blake in the final.

February 2010 – Federer claims that he was forced to produce his ‘finest ever match’ to overcome Murray in straight sets in the final of the Australian Open. In response, a 22-year-old Murray replied: "I can cry like Roger, it's just a shame I can't play like him. I'm done. Sorry."

February 2011 – Reaches a second Australian Open final but is beaten by Novak Djokovic in straight sets.

August 2012 – Redemption. Representing Great Britain in the 2012 Olympic Games, Murray would win two medals – a silver in the mixed doubles, alongside Laura Robson, and a gold in the men’s singles. Murray was at his scintillating best to win that gold, losing just seven games in an epic final victory over Federer on Centre Court at the All England Lawn Tennis Club.

September 2012 – Major breakthrough. In the final of the US Open, Murray defeated Djokovic in five sets to become the first British man to win a Grand Slam since Fred Perry in 1936.

January 2013 – Murray receives an OBE in the New Year Honours list for his services to tennis.

May 2013 – Retires from the Rome Masters due to a hip injury during his second-round match against Marcel Granollers on his 26th birthday. Would later go on to withdraw from Roland Garros, citing a back injury.

July 2013 – A Wimbledon champion at last! Murray overcomes Djokovic in a straight sets match that lasted over three hours, to become the first British winner of the men's singles title since Fred Perry in 1936.

September 2013 – Murray opts to undergo back surgery following problems at Roland Garros, the US Open and Davis Cup.

July 2014 – Following a quarter-final defeat at Wimbledon to 23-year-old Grigor Dimitrov, Murray would fall outside the top ten in the world rankings for the first time since June 2008.

February 2015 – Reaches a fourth Australian Open final only to be beaten by Djokovic for the third time. That run to the final would clinch Murray a return to the top four in the world rankings for the first time in 12 months.

February 2016 – Reaches a fifth Australian Open final only to succumb to Djokovic for the fourth time. The Serb won in straight sets to claim a record-equalling sixth title.

June 2016 – Wins a record fifth title at Queen’s Club, defeating Milos Raonic in the final despite being a set and a break down.

July 2016 – More Wimbledon glory. In a repeat of that year’s Queen’s final, Murray claimed his second Wimbledon crown with victory over Raonic.

November 2016 – Murray reaches top spot. Following victory in the ATP Masters 1000 Paris event – his eighth title that year – Murray reached number one in the world for the first time in his career, ousting Djokovic at the summit of the rankings.

January 2017 – Murray receives a knighthood in the New Year Honours list for his services to tennis and charity.

March 2017 – Missed a month’s tennis with an elbow injury, before returning to compete in the Monte Carlo Masters in April, losing out in the third round to Albert Ramos-Vinolas.

August 2017 – Withdraws from the US Open with a hip injury two days before the event, missing his first Grand Slam since Roland Garros in 2013. Would not play again in 2017 and would relinquish his World Number 1 ranking to Nadal.

January 2018 – Despite travelling to Australia to practice for the Brisbane Open, Murray withdraws from the event – along with the Australian Open – and takes to Instagram to tell his fans that he’s considering surgery for his hip. Five days later, Murray confirms that he’s undergone surgery in a second post.

June 2018 – Returns to action at the Queen’s Club but loses to Nick Kyrgios in the first round. Was given a wildcard for the Eastbourne International, where he beat Stan Wawrinka in the first round before losing to Kyle Edmund in the second.

July 2018 – Withdrew from Wimbledon with a "heavy heart" a day before the tournament, saying it was too soon to play five-set matches. As a result of this withdrawal, he dropped to 839th in the ATP Rankings, his newest low ranking since he first entered the ATP Rankings on 21 July 2003.

August 2018 – Reaches the third round of the Washington Open. Match lasts until just past 03:00 local time. Murray wept after the conclusion of the match against Marius Copil, overcome with emotion.

September 2018 – Reaches the quarter finals of the Shenzhen Open but is then forced to pull out of the China Open the following week, after suffering an ankle problem. Decides to call time on his season to prepare for 2019.

January 2019 – That interview. At a press conference before the Australian Open, an emotional Murray announced that he could possibly retire from professional tennis due to struggling physically for a "long time".

March 2019 – Murray confirms that he has undergone a second hip operation – known as hip resurfacing – following advice from American doubles legend Bob Bryan who had the same procedure. Murray states that he is pain-free and is targeting a return to tennis.

June 2019 – Return to the fold. Partnering Spaniard Feliciano Lopez, Murray enters into the doubles competition at Queen's. Much to the delight of the fans, and the tennis world, the pair would go all the way and claim victory.

July 2019 – Back to Wimbledon! Murray returned to the hallowed turf of the All England Club to first take part in the men’s doubles – alongside France’s Pierre-Hugues Herbert – and then the mixed doubles where he formed a dream partnership with US great Serena Williams.

August 2019 – Makes his singles return at the 2019 Winston-Salem Open – where he lost in straight sets to American Tennys Sandgren.

October 2019 – Back in the winner’s circle. Two months after returning to competitive singles, Murray triumphs in the European Open in Antwerp, Belgium, beating Stan Wawrinka in the final.

December 2019 – Forced to withdraw from the Australian Open 2020 after suffering from a pelvic injury.

June 2020 – Returns to action for the first time in seven months at the Schroders Battle of the Brits.

August 2020 – Defeats World Number 7, Zverev 6-3, 3-6, 7-5 in the second round of the Western & Southern Open. It was the first time that Murray beat a player inside the world’s top ten since 2017, where he overcame Kei Nishikori in the quarter-final of the French Open.

September 2020 – Recovers from two sets down to win his first Grand Slam match in 20 months 4-6 4-6 7-6 (5) 7-6 (4) 6-4 against Japan’s Yoshihito Nishioka. Would exit the event in the second round after defeat to 15th seed Felix Auger-Aliassime of Canada. Is beaten by Wawrinka in straight sets in the opening round at Roland Garros.

October 2020 – Withdraws from an ATP Tour event in Cologne, citing issues with a persistent pelvic problem.

December 2020 – Returns to action at the Battle of the Brits Premier League of Tennis, beating British No.1 Dan Evans and British No.3 Cam Norrie in the two matches he played.

February 2021 – After missing the Australian Open due to contracting Covid-19, Murray starts his season on the Challenger Tour and reaches the final at the Biella Challenger tournament in Italy.

February 2021 – Beaten in the first round of the Open Sud de France by Egor Gerasimov in his first ATP Tour-level match of the year.

March 2021 – Beat home favourite Robin Hasse in the opening round of the AMRO World Tennis Tournament before losing in straight sets to then World No.8 Andrey Rublev.

June 2021 – Returned to action at The Queen's Club - where he is a five-time champion. Won his first round match against France's Benoit Paire before losing to eventual champion Matteo Berrettini in round two.

July 2021 - Was selected to compete for Team GB in his third Olympics at the 2020 Tokyo games where he and Joe Salisbury reached the quarter-finals in the men's doubles.

January 2022 - Started the season by reaching his 69th career ATP final at the Sydney Tennis Classic. He beat Nikoloz Basilashvili, David Goffin and Reilly Opelka en route to the final, where he lost to top seed Aslan Karatsev 6-3, 6-3.

March 2022 - Murray reached a new milestone in his career, becoming only the 18th man to win 700 tour matches after beating Japan's Taro Daniel. In true Murray style, the Brit came from a set down and then a break in the third to win 1-6, 6-2, 6-4 in Indian Wells.

Vote for your favourite murray wins

After sealing his 700th career win, we look back at some of the biggest and best wins from Andy Murray's incredible career. Vote for your favourites in our latest Murray poll.