Great Britain will host seven ITF-sanctioned wheelchair tennis tournaments throughout 2019, meaning the summer months will attract some of the world’s very best players to British shores. While Nottingham Tennis Centre and The Queen’s Club host opportunities to watch a variety of ATP and WTA players in action ahead of The Championships, Wimbledon, the world’s top wheelchair stars, including our men’s team who recently became world champions, will be in action at all three venues.

Check out our guide below to Britain’s biggest summer wheelchair tournaments:

Where? The Queen’s Club

Wheelchair tennis doubles exhibitions were first held at The Queen’s Club over a decade ago, and now for the second year in a row the Fever-Tree Championships will welcome some of the very best men’s players to contest both singles and doubles events.

This year’s tournament will see a field of eight players vying for the prestige of lifting the famous trophy, with competitors hoping to accrue valuable world ranking points in the process.

Prior to Olsson’s current reign at SW19, Rio Paralympic champion Reid won the inaugural Wimbledon men’s wheelchair singles title in 2016, and both Hewett and Reid will be hoping that they can lift singles and doubles titles this year on home soil. 12 months ago, the pair were finalists in the men’s doubles and this year they are two of three Brits that home fans can cheer for, alongside Dermot Bailey. The trio recently joined forces to claim the BNP Paribas World Team Cup men’s title for Great Britain.

Singles finalist and doubles champion at the Fever-Tree Championships in 2019, Stephane Houdet, is one of three Frenchmen in this year’s field, whist all three Paralympic singles medallists from Rio will be in action, after Belgium’s Joachim Gerard joined Reid and Hewett on the podium in Rio.

Spectators with Ground Admission inc. Unreserved Court 1 and Centre Court tickets will be able to view from unreserved seating on the outside courts. Tickets can be purchased online for just £10.

Where? Surbiton Racket and Fitness Club

Introduced in 2017, the Surbiton Invitational is now a popular grass court warm-up event for some of those players preparing to go on and contest the wheelchair events at Wimbledon.

In its inaugural year, the tournament hosted a quad doubles exhibition match, which was the first step towards quad singles and doubles events now being a part of the tournament programme at Wimbledon.

A host of Wimbledon champions past and present, including Japan’s world No. 1 Shingo Kunieda, Brits Alfie Hewett, Gordon Reid and Jordanne Whiley; Sweden’s Stefan Olsson; Frenchmen Stephane Houdet and Nicolas Peifer; and Argentina’s Gustavo Fernandez have all graced the courts at Surbiton over the past two years.

Entry is free for spectators.

As one of just six tournaments worldwide to have Super Series status (the highest tier of wheelchair tournament outside of the Grand Slams), the British Open brings the vast majority of the world’s top players to Nottingham to compete for the men’s, women’s and quad singles and doubles titles.

While only a select few will qualify to play at Wimbledon, many more leading players from around the world will be in action. That will apply even more so in 2019, as this year’s British Open comes within wheelchair tennis’s qualification window for the Tokyo 2020 Paralympic Games.

The search for a first British Open men’s singles champion continues, with Alfie Hewett and Gordon Reid having both reached the final in recent years. Meanwhile, the 2019 British Open is likely to welcome back two-time women’s singles champion Jordanne Whiley as she plays in Nottingham for the first time since the second of her titles in 2016. Whiley has made a highly impressive return to international wheelchair tennis this year, after becoming a mum for the first time in January 2018.

Rio Paralympic silver medallist Andy Lapthorne and local Nottinghamshire favourite James Shaw are among those likely to lead the home challenge in the quad singles and doubles events.

During British Open week, there’s also opportunity to watch some rising stars in action, as the Nottingham Futures and Juniors tournaments take place at the same venue throughout the week. View the full schedule.

Entry is free for spectators and tickets are now available online.

Where? All England Club, Wimbledon

For the first time this summer a total of 20 of the world’s top wheelchair tennis players will line up at Wimbledon, as quad singles and doubles events make their debuts on The Championships competition schedule.

Last year, The Championships also saw Britain’s Andy Lapthorne come out on top in a quad doubles exhibition match that paved the way for the inclusion of quad singles and doubles events this year.

While Hewett’s ranking has gained him direct entry for The Championships in 2019, up to four Brits - including one or more of Reid, Lapthorne, Whiley or Shuker - could be in action in this year’s wheelchair tennis events once the wild cards are confirmed.

Sweden’s Stefan Olsson and Dutchwoman Diede de Groot will bid for a hat-trick of gentlemen’s and ladies' singles titles, while multiple Australian Open and US Open champions Dylan Alcott and David Wagner head the field of four players for the quad singles. 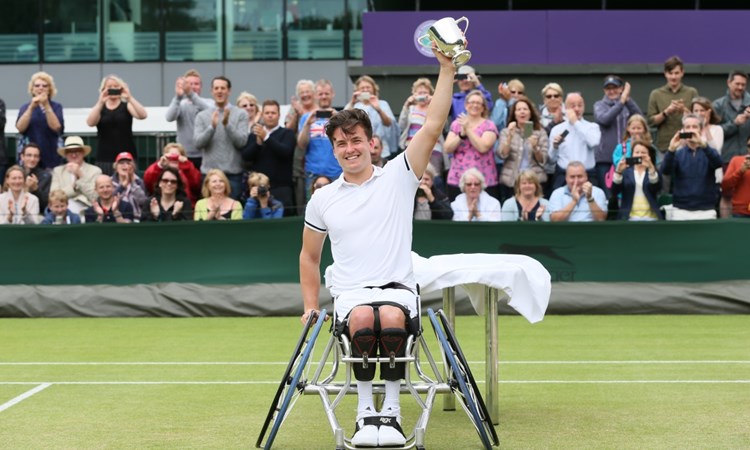