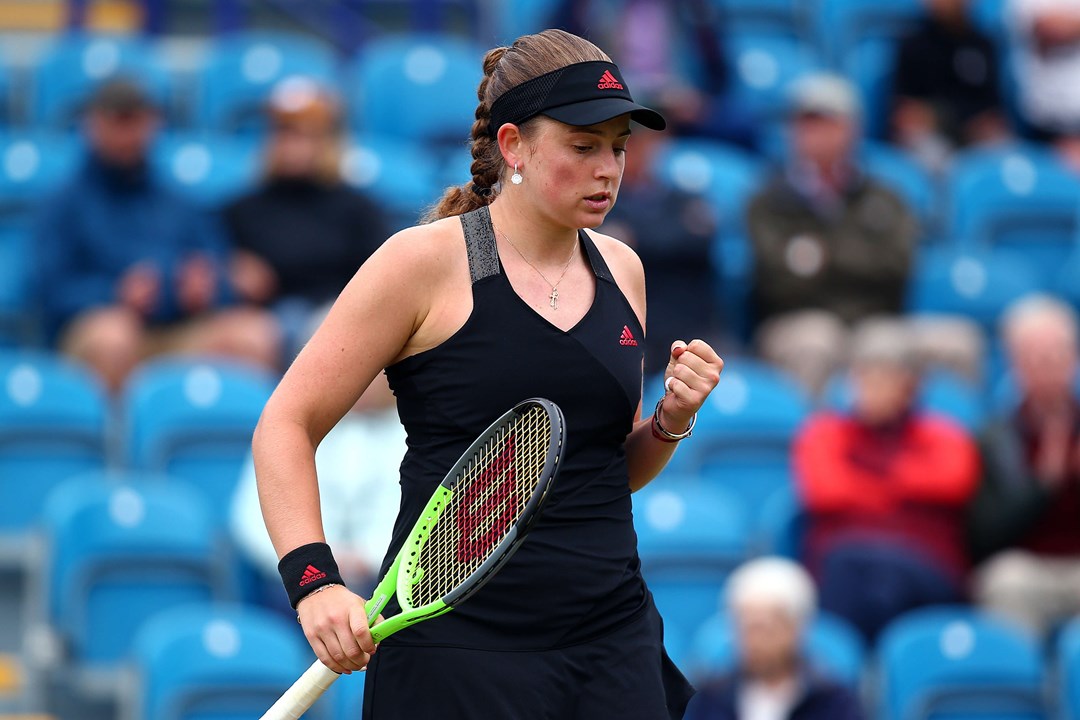 Jelena Ostapenko will face Anett Kontaveit in an all-Baltic final tomorrow at the Viking International Eastbourne.

Former French Open champion Ostapenko is through after defeating Elena Rybakina 6-4, 6-1 in an hour and 30 minutes.

Ostapenko progresses to her first final of the season and will be looking to become only the third wildcard to win the title in Eastbourne after Julie Halard-Decugis in 2000 and Monica Seles in 1996.

The World No.43 was deadly on the return from the first ball – firing her groundstrokes back at Rybakina in all corners of the court. She broke on the opening game on her third opportunity with a killer backhand winner off the back of a net cord and then broke again for 3-0.

With everything to do, Rybakina steadied herself and focused on hitting hard down the middle of the court, which seemed to cause her opponent a few issues as errors began creeping into the Latvian’s game.

Rybakina repaid the favour with a double break of her own, but just couldn’t get anything going on the serve – winning only 18% of points on the second serve. Sensing her moment to pounce Ostapenko battled through another lengthy game to restore her lead and served out the set at 5-4.

The Kazakhstan star called for the trainer at the end of the set and appeared to be suffering with some lower back pain.

She continued to play on but couldn’t find her level as Ostapenko blasted through the second set dropping only a single game as she secured her place in the final.

“I'm really happy with the way I’ve played this week, and every match I played better and better,” she said.

“It's been a while without finals, so I'm really happy to be in a final and looking forward to tomorrow's match.

“It's actually nice to have a Baltic final, because we’re not such big countries, but still have good players, so it's nice. Anett I know since juniors and we’ve been playing a lot, like maybe not so many matches but, I mean, we practice sometimes together, in juniors, and played even doubles. So I know her quite well.”

In Saturday’s final Ostapenko will play World No.27 Kontaveit, who came through her match against Camila Giorgi after the Italian was forced to retire with an injury.

Kontaveit – who defeated former US Open champion Bianca Andreescu this week – will be looking to win her second career title on grass, having lifted the trophy at ‘s-Hertogenbosch in 2017.

However, it was her opponent Giorgi who was asking the questions early on – bringing her impressive all-round grass court game to the big stage once again. She had three break point opportunities in the first game but failed to convert on any, as the Estonian breathed a sigh of relief.

Kontaveit saved eight break points in the set, but took her chance at the first time of asking, giving herself a two game advantage at 5-3.

In a hard fought ninth game, it was evident that that Italian qualifier was in some discomfort and despite finally managing to break back, she called an end to the match at 5-4.

“Of course it's never the way you'd want to win,” said Kontaveit. “It was a very close nine games, and I was very surprised and very sorry for her that she had to retire.”

“I think I have played really well here and had some very good wins. I'm definitely feeling more confident now.”

Tomorrow’s men’s final will see Alex de Minaur take on Lorenzo Sonego in a clash between the second and third seeds.

De Minaur hasn’t dropped a set all week on his way to the final and once again showed his class in a 6-3, 7-6 (2) win over Korea’s Soonwoo Kwon.

The World No.77 was on a fantastic run to the semi-finals, coming into the tournament as a lucky loser, and caused the Australian a few problems, breaking him twice in the match. But the cinch Championships semi-finalist never looked in any real trouble and proved just a level too high on the day.

Sonego on the other hand came through a three set battle against another lucky loser into the tournament – Max Purcell.

Purcell’s dream week has seen him defeat the likes of Gael Monfils and Andreas Seppi, but couldn’t get over the line against a strong performance from Sonego. After a minor dip in form in the second set, the Italian came out all guns blazing in the decider, winning 89% of points on his first serve to wrap up a 6-1, 4-6, 6-1 win in an hour and 37 minutes.

In the men’s doubles final, Joe Salisbury and Rajeev Ram were defeated for the third time this year by the seemingly unstoppable Nikola Mektic and Mate Pavic 6-4, 6-3. The Croatian pair has now won seven titles already this season.