Ready to back the Brits? Tickets are now on sale for the Davis Cup in Glasgow this September
LTA Home Fan Zone US Open Head to Head: Alfie Hewett vs Gordon Reid

Ahead of their match in today’s US Open men’s wheelchair singles opening round, we take a closer look at the history between team mates, and rivals, Alfie Hewett and Gordon Reid.

Going into today’s contest, their head-to-head record on the international stage is tightly poised at 12-12. Here, we dig deeper into how their careers have developed to date.

The two Brits have been a feature at the top of their sport for several years. Hewett is a three-time Grand Slam champion, Reid has won two, and as a partnership they have claimed a remarkable seven men’s doubles Slam victories – all since 2017.

But on their journey to the summit of wheelchair tennis, the pair have faced off regularly against one another – first meeting in 2013 at the North East Wheelchair Tournament. Reid would triumph 6-0 6-1 over Hewett, and would go on to his next six meetings against his future doubles partner.

Hewett, who is now the British No.1 and World No.3, wouldn’t defeat Reid for four years – making his breakthrough in the semi-final stage of the 2017 Sydney International Open.

Hewett’s first win against his close friend and doubles partner would not be his last of a 2017 which proved to be a huge year for both men.

The duo would be involved in a number of firsts in the wheelchair game. They featured in the first all-Brit men’s singles semi-final at the British Open, thefirst all-Brit men’s singles semi-final at a Grand Slam in the US Open, and Hewett would win his first Grand Slam title at Roland Garros (Reid won two Wimbledon and the Australian Open in 2016).

In total the pair faced off against each other on seven occasions – Reid won three and Hewett won four.

Following a blockbuster 2017 for both men 2018 was also evenly-matched – the duo met on four occasions winning two apiece – but since 2019 Hewett has dominated.

Hewett – who won the US Open in 2018 and 2019 – was forced to work hard in his last encounter with Reid, winning 7-5 7-5 in a match held last week at LTA Wheelchair Tennis Series at the National Tennis Centre, and he will have to overcome his fellow Brit once again if he is to make it a three-peat of titles in New York. 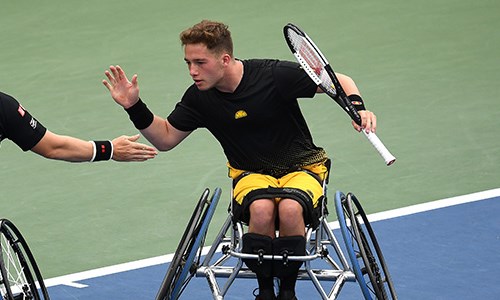