The TS Open Tour has returned in 2022 with more events and opportunities for yellow ball players to compete than ever before.

Following growth of the TS Open Tour brand last year, Tennis Scotland has announced an exciting addition to the leaderboard circuit, with entries to the brand-new ‘Stirling University Open’ now being accepted.

This year, the TS Open Tour will consist of the following areas:

The TS Open Tour leaderboard was introduced in 2018, allowing players to accumulate ranking points and climb the tables whilst competing at events on the circuit throughout the year. In addition to the frontrunners being crowned leaderboard champions, individuals occupying the top 12 spots on the men’s and women’s rankings also earn the chance to compete at the TS Open Tour Masters event in December.

Last year, a number of existing Grade 3 tournaments became part of the TS Open Tour brand, with the new Stirling University Open event providing an additional opportunity for players to boost their leaderboard points in February.

Entries to the upcoming TS 1000 at the University of Stirling are open until Monday 7 February. 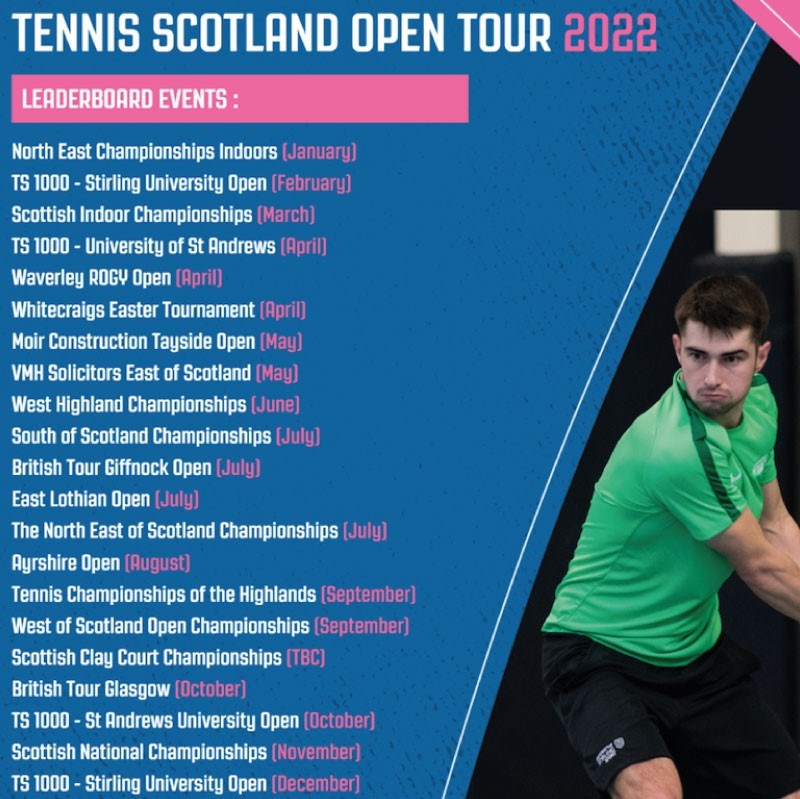 Following entry to a TS 500 competition, some players are automatically granted direct acceptance into the TS 1000 event (based on player rating and ranking) whilst the rest are granted entry to their selected TS 500 competition. This gives players the opportunity to compete against individuals of a similar standard while also providing the winners, and in some cases the runners up of the TS 500 Events, the chance to progress onto the TS 1000.

Entries to upcoming TS 500 events (linking with the TS 1000 - Scottish Indoor Championships) can be made via the links below:

As part of the Tennis Scotland Open Tour there will also be an end of season Masters event. Players can qualify for the two-day event, taking place in December, by accumulating points from the TS Open Tour circuit throughout the year. The singles points will be displayed in the TS Open Tour leaderboard, with the top 16 male and female singles players qualifying for the Masters and gaining the opportunity to get their hands on the Sword trophies, named in memory of former Scottish internationalists Derek and Allan Sword.

Tennis Scotland also work with local tennis clubs and organisers to deliver a range of TS 100 Club Series competitions, having coordinated more than 100 events since the introduction of tournaments. The half-day to full-day events are hosted by local clubs across the country, utilising a Fast4 format aimed at club improver players, adults and juniors.