There was double success for Nottingham players at the Aegon British Tour Masters at the weekend with Josh Ward-Hibbert and Freya Christie crowned 2015 champions.

The British No.7 was the top seed at the Nottingham Tennis Centre and reached the final without the loss of a set before coming up against Lisa Whybourn, who before shoulder surgery in 2014 was on the verge of the world’s top 200.

A determined Christie took the opening set 6-1 in 25 minutes and raced into a 3-0 lead in the second before seeing off a determined fightback to wrap up a 6-1, 6-3 victory.

The teenager said: “I am really happy to get the title this week and played some good tennis. Getting the third in a row makes it a special tournament for me. Hopefully I can carry this form into 2016.”

Won the @AegonUKtennis Masters today for the 3rd consecutive year! Now for the pre season training to commence 💪🏽🎾💪🏽 pic.twitter.com/jC19khxw65

With the top 32 men and 32 women taking to the courts in Nottingham, Ward-Hibbert was making his debut at the season ending event. 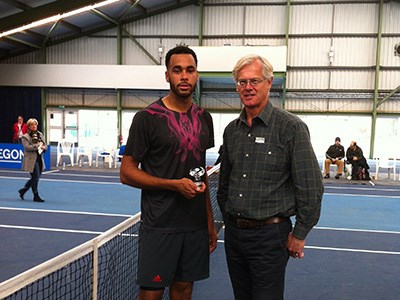 The 21-year-old was seeded No.3 and battled his way through to the final twice having to recover from losing the first set in both his quarter-final against Billy Harris and semi-final against Marcus Willis.

In the final he came up against the experienced but unseeded Richard Bloomfield, who has been world ranked inside the top 200. It was Ward-Hibbert who was fastest out of the blocks and quickly established a 4-0 lead in the opener showing the athleticism, power, and agility befitting a former international junior basketball player.

After wrapping up the set 6-2, he went on to win the final three games of a topsy-turvy second having trailed 5-4 to land the title in little over an hour and ten minutes.

On winning the tournament, both players will now be looking to use their victories as a platform to rise up the ATP/WTA world rankings in the early part of 2016.

The biggest upset of the week fell to Masters student at Durham University, Jonathan Binding, who overcame Davis Cup winner and No.1 seed Dan Evans in the quarter-final 6-4, 6-7(4), 6-4.