What a memorable week in Glasgow that was! The Aegon GB Davis Cup Team will contest their first final since 1978 against Belgium in November after seeing off the challenge of Australia. 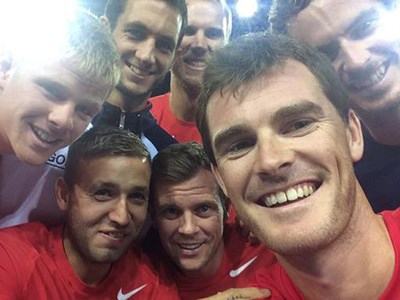 An inspirational Andy Murray took to the court all three days at The Emirates Arena and secured the victory with a straight-sets thumping of Bernard Tomic on Sunday.

With the scores level at 1-1 after Saturday’s singles, Murray teamed up with brother Jamie to win a dramatic five set doubles match against Lleyton Hewitt and Sam Groth played out in deafening noise.

Naomi Broady reached her maiden semi-final on the WTA Tour after a fantastic week at the Coupe Banque Nationale in Quebec, Canada.

The British No.3, into the main draw as a lucky loser, beat Alla Kudryavtseva, Alexa Glatch and Anna Tatishvili en route to the last four where her run was ended by Jelena Ostapenko.

Broady also had the winning formula on the doubles court with Amandine Hesse as they reached the semi-finals before losing to Maria Irigoyen and Paula Kania in a Super Tie-Break.

No.1 seed Amanda Carreras won her third ITF Pro-Circuit title of 2015 after winning the $10,000 Santa Margherita Di Pula without dropping a set. Carreras clinched the trophy after overcoming Jessica Pieri 6-4, 6-3.

Isabelle Wallace played a tough final at the $10,000 Madrid with Deborah Chiesa. After dropping the opener on a tie-break to No.2 seeds Estrella Cabeza-Candela and Cristina Sanchez-Quintanar the duo lost the second 7-5.