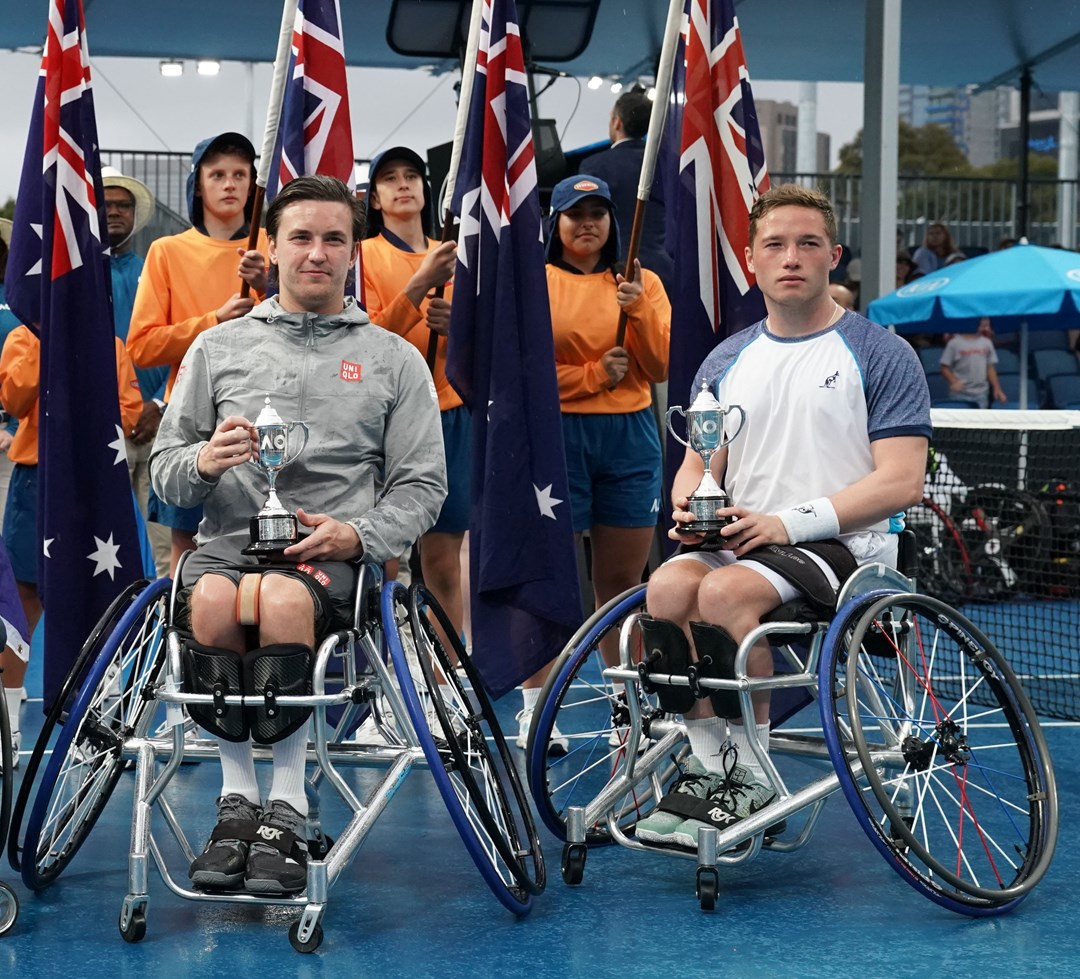 Alfie Hewett and Gordon Reid's hopes of a first Australian Open doubles title together came to an end on Friday at Melbourne Park when they were beaten in the final by French duo Stephane Houdet and Nicolas Peifer. Houdet and Peifer won 6-4, 6-2.

Hewett and Reid went into their fifth Grand Slam doubles final together and their fourth against Houdet and Peifer leading the French duo 3-1 in Grand Slam head-to-heads. However, after leading the opening set at 2-1 Hewett and Reid slipped 5-3 behind and their opponents took the set. Ultimately the reigning  Wimbledon and US Open champions were unable to produce their best tennis on the day as Houdet and Peifer took the title.

"It was a difficult match but it’s always difficult against them - especially when we’re not near our 100 per cent we make it even more difficult for ourselves. It was a frustrating match especially after some of the tennis we showed yesterday but we’ve got to do it in the more important matches so a little bit disappointed,” said Reid, who had been looking to secure back-t0-back Australian Open doubles titles after completing a career Grand Slam of doubles crowns last year in Melbourne."

"We were doing some of the right things, we were just not executing all of the points like we would want to. Like Gordon said we weren’t as good as yesterday, the rain maybe played a little bit of an effect at the end, but at 5-2 down it’s always difficult.  But we still believed, I still believed that we could come back as we always fight to the end and that’s what i think we did today, but it just wasn’t to be." 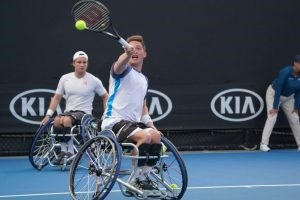 Alfie Hewett and Gordon Reid reached their fifth Grand Slam men’s doubles final together on Thursday at the Australian Open when the reigning Wimbledon and US Open champions beat Gustavo Fernandez of Argentina and Shingo Kunieda of Japan 6-1, 4-6, (10-6).

Elsewhere on Thursday in Melbourne, Andy Lapthorne and his American partner David Wagner produced a fine effort in their bid to win a fourth Australian Open quad doubles title together. 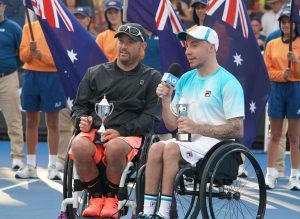 After a slow start against Australia’s Rio Paralympic champions Dylan Alcott and Heath Davidson, Lapthorne and Wagner dug deep to force a deciding match tie-break. However, Lapthorne’s hopes of taking his personal tally of Australian Open doubles titles to six ultimately slipped away as Alcott and Davidson took the win 6-0, 6-7(5), (10-6).

World No. 2 Lapthorne’s hopes of reaching a second successive Australian Open quad singles final also ended with a 6-2, 6-1 loss to Davidson in the second of three round-robin matches.

Alfie Hewett and Lucy Shuker narrowly missed out in three set contests after both saving match points on Wednesday’s opening day of wheelchair tennis at the 2018 Australian Open. Gordon Reid joined Hewett in bowing out of the men’s singles. Meanwhile a 6-1, 6-0 loss to Australian Dylan Alcott means that Andy Lapthorne’s bid to reach the quad singles final for the second successive year is likely to hinge on his second round-robin match on Thursday against Alcott’s countryman Heath Davidson.

Hopes of British success at the first Grand Slam of the year will also continue with Thursday’s quad doubles final and men’s and women’s doubles semi-finals. 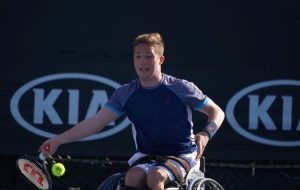 Hewett is likely to go to No.1 in next week’s UNIQLO Wheelchair Tennis Rankings published by the International Tennis Federation despite losing out to Sweden’s Stefan Olsson. Hewett dropped just the third game of the opening set and saved two match points at 5-3 down in the final set against Olsson before the reigning Wimbledon champion prevailed 1-6, 6-3, 6-4.

With current world No.1 Gustavo Fernandez of Argentina also seeing his Australian Open title defence come to an end on the opening day of competition, Hewett looks set to become world No.1 for the first time next week. 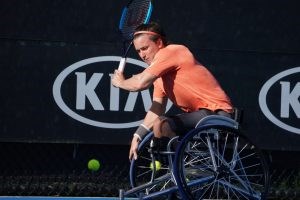 Reid’s hopes of lifting his second Australian Open title in three years came to an end against eight-time champion Shingo Kunieda of Japan, who won their opening match 6-1, 6-3.

Shuker made a bold bid to reach her third Australian Open women’s singles semi-final and her second in successive years.

However, after having a 4-1 lead in the second set tie-break against former Australian Open champion Sabine Ellerbrock and coming from 3-0 down and saving match points at 5-3 down to force another tie-break in the deciding set, Shuker eventually succumbed 2-6, 7-6(6), 7-6(4) after two hours and 43 minutes. 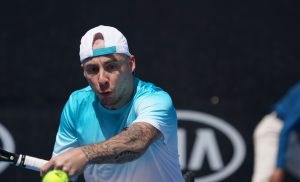 Lapthorne won just the sixth game of the first set as he faced three-time Australian Open champion Alcott in a rematch of last year’s quad singles final. Britain’s world No. 2 now takes an unbeaten record against Davidson into his second round-robin match on Thursday.

Alcott and Davidson will also be on the opposite side of the net in Thursday’s quad doubles final as Lapthorne and Wagner bid for their fourth Australian Open title together, having beaten Australia’s Rio Paralympic gold medallists in last year’s final.

Alfie Hewett and Gordon Reid could meet in all-Brit men’s singles semi-final later in the week at the 2018 Australian Open after both being drawn in the bottom half of the men’s singles draw ahead of Wednesday’s start to the wheelchair tennis events at the first Grand Slam of the year at Melbourne Park.

British No.1 and world No.2 Hewett, who is within reach of becoming men’s singles world No.1 this week if Argentina’s Gustavo Fernandez is unable to defend the Australian Open title he won 12 months ago, meets Wimbledon champion Stefan Olsson of Sweden in his opening match on Wednesday. 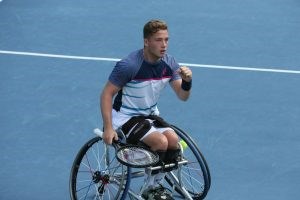 Hewett, last year's US Open men's singles runner-up , has won his last seven matches against Olsson and has already beaten the world No. 6 ranked Swede this season. He won their quarter-final two weeks ago at the first tournament of 2018, the Sydney International Open, where Hewett eventually finished runner-up to Kunieda after contesting an all-Brit semi-final against Reid.

World No.4 Reid’s last match against Kunieda also ended in victory when they met in last month’s men’s singles semi-finals at the NEC Wheelchair Tennis Masters, where Reid and Hewett met in the final. Reid, the 2016 Australian Open champion, also beat Kunieda in their quarter-final at Melbourne Park two years ago before the Brit went on to win the first Grand Slam singles title of his career.

Reigning Wimbledon and US Open men’s doubles champions Hewett and Reid, who were on opposite sides of the net in last’s year’s Australian Open men’s doubles final, team up for the first time at Melbourne Park this year. They will play Fernandez and Kunieda in their semi-final scheduled for Thursday. 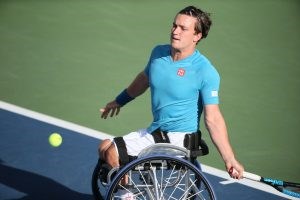 A finalist in the quad singles at both the Australian Open and the US Open last year, world No.2 Lapthorne faces three-time defending champion and world No. 3 Dylan Alcott on Wednesday. Most recently Lapthorne beat Alcott in straight sets in the round-robin phase of  the US Open in New York, where the Brit finished runner-up to American David Wagner.

Lapthorne will play Wagner and Alcott's fellow Australian Heath Davidson in his remaining two round-robin matches at Melbourne Park later this week, with the top two players after the round-robin phase of the competition going forward to Saturday’s final.

Thursday’s second day of wheelchair tennis competition at Melbourne Park is scheduled to feature the quad doubles final as Lapthorne and Wagner pair up to try and win their fourth Australian Open doubles title together.

After previous victories together in 2014, 2015 and 2017, Lapthorne and Wagner meet Rio Paralympic champions Alcott and Davidson, with Lapthorne out to try and claim his sixth Australian Open quad doubles title in total after back-to-back victories in 201 and 2012 partnering fellow Bit Peter Norfolk. 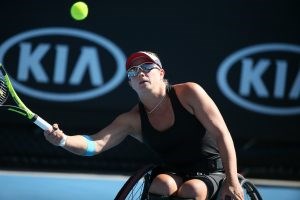 World No.6 Shuker, who last year reached her second Australian Open women’s singles semi-final since 2013, plays world No.4 Ellerbrock for just the second time since beating the German at the 2016 NEC Masters in London.

Shuker already has winning form against higher ranked opposition this season. Last week she defeated Dutch world No. 5 Marjolein Buis in the first round of the ITF 1 Melbourne Open.

Shuker began her 2018 season two weeks ago by winning the first Super Series women’s doubles title of the year in Sydney. Whilst partnering Japan’s Yui Kamiji on that occasion, Shuker and Kgothatso Montjane, her South African partner at Melbourne Park this week, face current Roland Garros champions Kamiji and Buis in their women’s doubles semi-final.