Hundreds of tennis officials from across Britain are coming together online this week for a virtual edition of the annual LTA National Officiating Conference.

In what will be the most extensive edition of the conference to date, a total of 25 different sessions are being staged over six days, with the activity culminating with the AGM of the Association of British Tennis Officials (ABTO) on Sunday.

Attendees will be given a progress update on the LTA’s Competitions Strategy as part of its vision to open tennis up to more people, and receive an update on procedures and rules, with officials being taken through an interactive session covering various scenarios. The range of sessions will also cover topics including disability tennis competitions, padel tennis, the new LTA Youth competition pathway for juniors, and the new ITF World Tennis Number rating system.

Speakers at the conference include LTA CEO Scott Lloyd in conversation on his journey into tennis, his vision for tennis in Britain and the LTAs priorities for 2021, professional football referee Sam Allison speaking about becoming the first black referee in football’s top four divisions since 2009 and his desire to progress further in the game, and Dr. Duncan Mascarenhas, an Associate Professor of Sport Psychology & Coaching at Edinburgh Napier University, sharing his experience of 20 years working with elite sports officials and providing practical advice on how best to communicate with players and make decisions under pressure.

Attendees will also get the opportunity to put their questions to a panel of leading international tennis officials as Great Britain’s Jane Harvey, Alison Hughes and James Keothavong join ITF Head of Officiating Soeren Friemel to discuss a range of officiating topics.

Ahead of the conference, attendees received a welcome message from Grand Slam champion and Great Britain doubles No.1 Joe Salisbury, thanking officials in Britain for all they do for tennis, saying that it is not often acknowledged but it is hugely appreciated.

Matthew Morrissey, LTA Officiating Manager, said: “While it has not been possible to stage the 2020 LTA National Officiating Conference in the usual way, we are really pleased to have taken the opportunity to put together such a comprehensive agenda with a whole week of online sessions and workshops.

“The response of officials has been tremendous, making this the biggest conference we have staged to date. Officials and competition organisers are not often in the spotlight, but they truly are the unsung heroes of tennis – the effort the LTA has put in to making this conference happen is a reflection of how much they are valued, and I know it will be a really useful week for all the LTA Licensed Officials attending”.

To find out more about officiating in tennis click here. 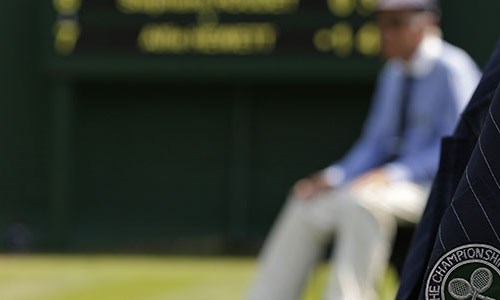