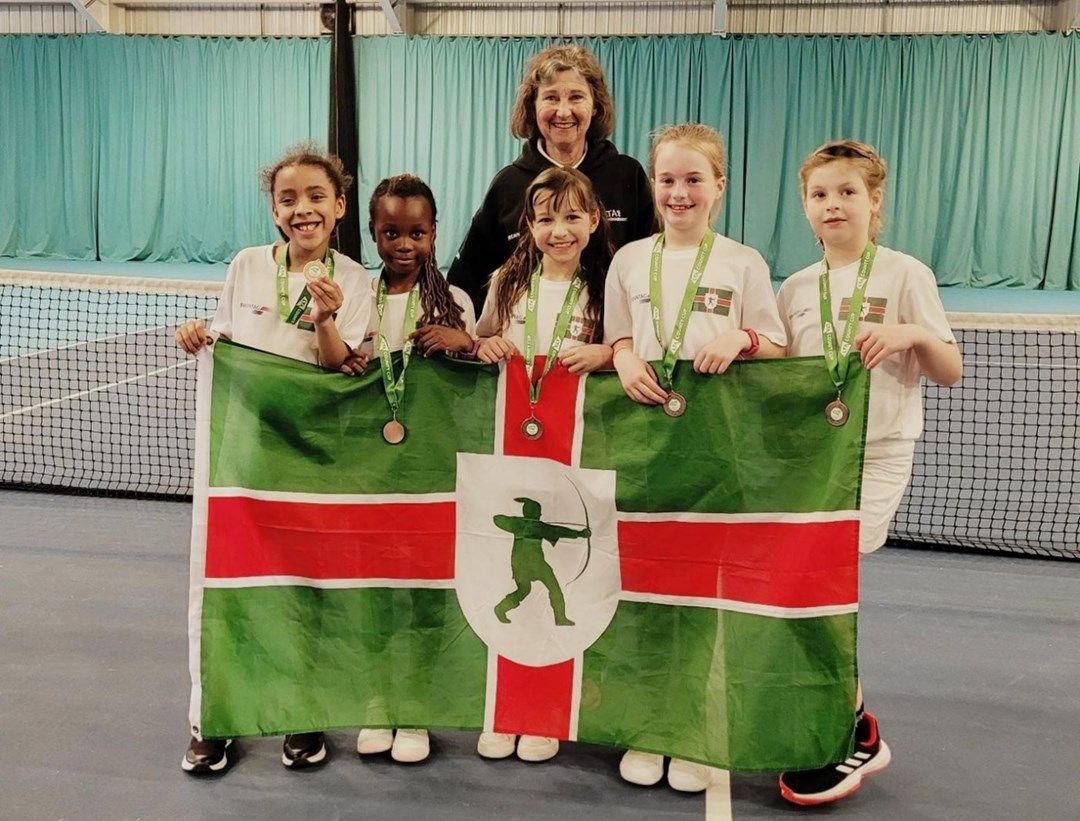 The Northern National Finals were played at The Graves Centre, Sheffield. The county finalists were Cambridgeshire, Yorkshire, Lancashire, North of Scotland and Nottinghamshire.

Our girls were the third round on, which allowed them to watch the players they would compete against.

The first matches were against Cambridge, with all four of our girls playing well. Evie managed to take Bella Yu-Tsen Lin to 3-3, but sadly lost the tie-break 5-7. Star, Sofia and Imogen lost in straight sets against a very strong team who did go on to win the event. All the singles matches were played first.

Our next round was against the North of Scotland. Having watched previous matches, I felt our girls would feel more confident. Evie had a 4-0 win against Matilda Kasselstrand, Star won 4-2 against Maisie Currie, and Sofia had a closer match against Sasha Shearer 4-3. Mila lost to Lily Metelski, a tougher competitor, but we were 3-1 up in matches. Both Imogen and Mila are eligible to play in this competition next year.

The third round match was against Yorkshire. Evie had another tight match against Emmanuella Idemudia, with the match going to 3-3 again. But, against a more consistent player, Evie lost the tie-break 3-7. Star played well but lost to Alessia Piani 2-4. Sofia played well against Nayvie Simpson, and with long rallies, had a successful win 4-2. Imogen played a steady match, but Thea Hodkinson was just too strong and she lost 1-4.

Notts' last singles round was against Lancashire. Evie’s opponent, Chloe lau, had the biggest serve of anyone in the event. Blocking the returns of serve was the answer. As Chloe was forced into an error, Evie won 4-0. Star had her toughest match against Vanessa Zelca, which she sadly lost 1-4.  Sofia played a very solid match against Jia Kochhar, holding her concentration to win 4-0. Mila had another tough match against Amarachi Ikem, losing in a straight set.

With the singles all completed, the doubles commenced with us playing Cambridge. Notts were 4-0 down so we knew they had won this rubber. Evie and Sofia played together and had a great win of 4-1, while Star and Imogen played well but went down 1-4, giving the final result of 1-5 to Cambridge.

The second doubles was against the North of Scotland. We were 3-1 up after the singles, so only needed one of these matches to win. Evie and Sofia played together, looking very confident they won 4-2. Star and Mila played well, but just went down 2-4. This gave Notts the overall match win 4-2.

The third doubles was against Yorkshire, and after the singles they were 3-1 up. Their first doubles pair were just too strong for Evie and Sofia. They played well but went down 2-4. Star and Imogen played really solid tennis, going to 3-3. They held their concentration but sadly lost the tie-break 5-7. This result gave Yorkshire a 5-1 win.

The final doubles was against Lancashire. The match score was 2-2, with Evie and Sofia having a solid win 4-1. Star and Mila had a long match, eventually losing 2-4. This meant we had to play a match shootout: a tie-break to 10, with each doubles pair consisting of one player from each previous matches. Evie and Star started slowly, going 1-4 down, but they kept their focus and nerve to achieve a 10-8 win. This result gave the Notts girls a 4-3 win.

It was a long day, with all the players physically and mentally exhausted. The energy returned at the presentation when they were awarded their medals for coming in third place. A great achievement.

My congratulations to all the girls! They played so well, with great behaviour on and off court.

My thanks as always to the parents for their support.